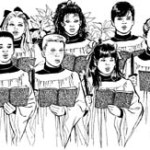 Mamacita says:  I’ve posted about this subject before, but with the approach of holiday season, it’s on my mind again, so I’ve written a new post about this same thing.

This is for you, parents. ALL of you parents. Holidays concerts are fast approaching, and your children are working hard to prepare. Don’t discount their big night because your personal feet hurt, you’re hungry, you’re missing your shows, and you left your good manners at home.

We’re tired.  We work all day and in the evenings, we deserve a few hours to rest, eat, and just, well, unwind. We deserve some time to ourselves, to put our feet up, watch some tv, sigh a lot, snack, and just BE.  We deserve  some time to do these things before we go to bed and get some sleep so we can do the same things again tomorrow.  Undisturbed downtime.  Yes, we deserve some of that.

If you are a parent of school-age children and this is your typical evening, shame on you.

If this is what you choose – yourself – instead of getting up off your, um, couch, and heading out to watch your child participate in something, shame on you.

Shame on you, too, if you stay in your seat just long enough to watch your own child’s part and then leave as soon as you can to get home and commence your well-deserved unwinding.

EVERY CHILD DESERVES AN AUDIENCE. 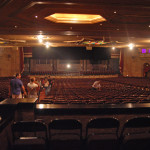 For over twenty years, I attended school concerts, spelling bees, science fairs, plays, and other things, and for over twenty years I watched families pack up and leave the very minute THEIR child’s part was finished.  These people paid no attention to the fact that the show was still going on while they were loudly bustling themselves up the aisles, out the doors, and across the parking lot so they could beat the rush getting out of the place, and get HOME where they could, finally, after an extra-long day, unwind.  After all, they deserved it, didn’t they?

No, they didn’t.  In fact, what these people want or think they deserve doesn’t even enter into the equation here.  It is the children who matter, not the adults.

The smallest children had the biggest audience, but as soon as the lower elementary’s part in the concert was over, these were also the very people who couldn’t leave fast or soon enough, paying no attention whatsoever to the older children still on stage.

The upper elementary children had a smaller audience, and even those parents often required their kids to find them as soon as their part was over so they could go home and get what was left of that well-deserved downtime-before-bedtime.  TV is important, you know, and a kid’s show isn’t, especially when it isn’t even MY kid up there now.

By the time the middle school kids were onstage, only Grandma, Mom, a few antsy siblings, and those families with class remained in the audience.  The older kids played mostly to empty seats, because the once filled-to-overflowing, standing-room-only auditorium had emptied like a kicked anthill.

There’s FOOTBALL on TV that night?  Lost is on?  Good parents know that’s not even a negotiable point.  Your children come first, or you’re a bad parent.

If you have small children whose part in a concert is usually first, try to picture YOUR child singing his/her heart out before an empty auditorium. 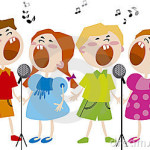 Think of how those children must feel when you’re packing up and leaving while they’re on stage singing much-practiced songs meant for you, and you obviously care more about yourselves than about children who aren’t yours . . . .

Oh, and before I forget:  even though I pretty much covered the subject of proper theatre behavior in another post, let me repeat a few things here:  While you’re sitting in your seat, watching a concert, shut up.  Nice people do not talk or otherwise make noise in a theatre. Nice people are quiet as mice in a theater, as well.  (Note the spelling difference.  Look it up.)  In both places, nice people are quiet.

Stay for the whole thing.  I don’t CARE if you’re tired or bored out of your mind.

Put your child in those other children’s places.  Remember, YOUR child is someone else’s child to everyone else in the universe except you.  You don’t want other people treating your child like that, do you?

Stay for the whole concert.  You’re bored?  Too bad.  You hate this stuff?  I don’t care.

Don’t detract from the glory and wonder and delight of children singing together just because you’re too selfish to even try to listen properly and enjoy it.  Don’t make children feel that their hard work was in vain because all YOU can think about is that if you leave now you might get in on the last quarter of your very important game.

Anyone of any age who does not show respect to those onstage is a rude, childish beast.

I can’t say this enough:  Every child deserves an audience.  STAY IN YOUR SEAT until the entire thing is over.

Yeah, poor you.  Poor you with a child who has the ability and the desire to participate in the arts or the sciences.  Millions of parents would give anything they’ve got to be in your shoes, and you would rather throw it away than take advantage of it.

How much would y’all bet that these same parents find no difficulty whatsoever in sitting for hours watching a sport?

I think we all know what kind of parents would make that choice.

Children singing their hearts out while adults are walking out so they can get home and watch tv and have a beer and put their feet up.  Such people are beyond my comprehension.

Children are singing for us; why don’t we even want to listen?