Mamacita says: Remember those scenes in You’ve Got Mail where Meg Ryan is talking about how, even at her age, she still loves the time of the season when the leaves are colorful, the weather is divine, and every store has school supplies. And then she’s swept off her feet when Tom Hanks, who doesn’t know Meg loves school supplies, says this: 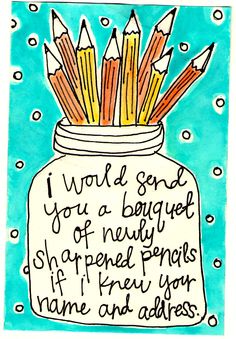 As adults, we take seasonal indicators/decorations for granted. We like to mark the season with a centerpiece or bouquet or display, but the days when we were struck voiceless by the miraculous representation of a season, in public, and that’s a shame. We expect store windows and school bulletin boards and office tables to remind us of what season it is, and unless it’s our job, we don’t do a lot of thinking about how that tiny trimmed tree or vase of mums or patriotic display or heart-shaped window cling or carved jack-o-lantern got there.

To a small child, these things are part of the miracle of the universe.

In A Tree Grows in Brooklyn, Francie Nolan knew that summer was over and autumn had officially arrived when she saw the vase of autumn leaves and bittersweet on the librarian’s desk. Francie would look at the display and her heart

would ache with happiness and sadness and nostalgia and glowing joy and all the other emotions we don’t usually think small children could possibly feel. Francie didn’t have any labels for her feelings and thoughts; she just looked at the display that represented the shifting of the seasons and loved it.  And it told her that the seasons had changed.

Years later, when Francie was grown up, she returned to that library and that same librarian and mentioned the vases of seasonal flora, and was devastated to learn that the librarian hadn’t even noticed them and thought the janitor must have done that.

As adults, we simply must start paying attention, the way we did when we were children.

Leo Buscaglia’s papa knew. Every night at dinner, the same thing would happen.

Papa, at the head of the table, would push his chair back slightly, a gesture that
signified the end of the eating and suggested that there would be a new activity. He

would pour a small glass of red wine, light up a thin, potent Italian cigar, inhale deeply, exhale, then take stock of his family.

For some reason this always had a slightly unsettling effect on us as we stared
back at Papa, waiting for him to say something. Every so often he would explain why he did this. He told us that if he didn’t take time to look at us, we would soon be grown and he would have missed us.

Peter Banning’s wife Moira knew, too. She tried to explain to her husband:

Your children love you, they want to play with you. How long do you think that lasts? Soon Jack might not even want you to come to his games. We have a few special years with our children, when they’re the ones that want us around. After that you’re going to be running after them for a bit of attention. It’s so fast, Peter. Just a few years, and it’s over. And you are not being careful. And you are missing it.

He may have been a grown-up Peter Pan, but he needed a drastic reminder.  Remember, just a few hours before, he had yelled “Stop acting like a child!” at his son, who replied, “I AM a child!”

As parents, we have the power to make ordinary days extraordinary.  Let’s use that power.  It’s a magic so strong that, done right, it will help create children who are full of light, full enough that they’re better able to drive out the darkness than are the poor children being brought up in families who don’t know the difference between one day and the next, let alone one season and the one following.

Use your super powers for good, parents.  Cultivate the noticing.  Cultivate it in yourselves AND in your children. It’s the time of the season every day.