Mamacita says:  Nightmare #3: When I did my student teaching, this poem was in the seventh grade literature book.  I’d never seen it before, and it made a definite impression on me.  I absolutely loved it, and I still love it.  Why?  I have no idea.  I just do.

My obsessions with sci-fi, fantasy, Harry Potter, Lord of the Rings, Dr. Who, and all the trappings of geekdom and nerdery have nothing to do with it, I’m sure.

We had expected everything but revolt

And I kind of wonder myself when they started thinking–
But there’s no dice in that now.
I’ve heard fellow say
They must have planned it for years and maybe they did.
Looking back, you can find little incidents here and there,
Like the concrete-mixer in Jersey eating the wop
Or the roto press that printed ‘Fiddle-dee-dee!’
In a three-color process all over Senator Sloop,
Just as he was making a speech. The thing about that
Was, how could it walk upstairs? But it was upstairs,
Clicking and mumbling in the Senate Chamber.
They had to knock out the wall to take it away
And the wrecking-crew said it grinned.
It was only the best
Machines, of course, the superhuman machines,
The ones we’d built to be better than flesh and bone,
But the cars were in it, of course . . .
and they hunted us
Like rabbits through the cramped streets on that Bloody Monday,
The Madison Avenue busses leading the charge.
The busses were pretty bad–but I’ll not forget
The smash of glass when the Duesenberg left the show-room
And pinned three brokers to the Racquet Club steps
Or the long howl of the horns when they saw men run,
When they saw them looking for holes in the solid ground . . .

I guess they were tired of being ridden in
And stopped and started by pygmies for silly ends,
Of wrapping cheap cigarettes and bad chocolate bars 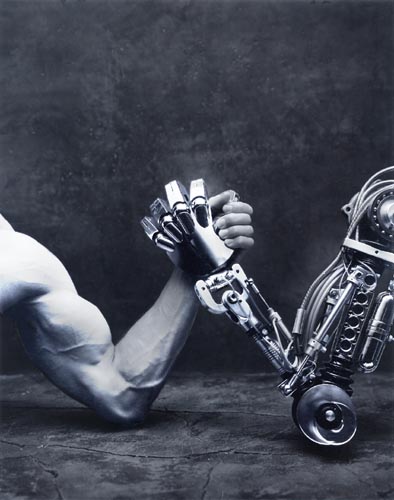 Collecting nickels and waving platinum hair
And letting six million people live in a town.
I guess it was tha, I guess they got tired of us
And the whole smell of human hands.
But it was a shock
To climb sixteen flights of stairs to Art Zuckow’s office
(Noboby took the elevators twice)
And find him strangled to death in a nest of telephones,
The octopus-tendrils waving over his head,
And a sort of quiet humming filling the air. . . .
Do they eat? . . . There was red . . . But I did not stop to look.
I don’t know yet how I got to the roof in time
And it’s lonely, here on the roof.
For a while, I thought
That window-cleaner would make it, and keep me company.
But they got him with his own hoist at the sixteenth floor
And dragged him in, with a squeal.
You see, they coöperate. Well, we taught them that
And it’s fair enough, I suppose. You see, we built them.
We taught them to think for themselves.
It was bound to come. You can see it was bound to come.
And it won’t be so bad, in the country. I hate to think
Of the reapers, running wild in the Kansas fields,
And the transport planes like hawks on a chickenyard,
But the horses might help. We might make a deal with the horses.
At least, you’ve more chance, out there.
And they need us, too.
They’re bound to realize that when they once calm down.
They’ll need oil and spare parts and adjustments and tuning up.
Slaves? Well, in a way, you know, we were slaves before.
There won’t be so much real difference–honest, there won’t.
(I wish I hadn’t looked into the beauty-parlor
And seen what was happening there.
But those are female machines and a bit high-strung.)
Oh, we’ll settle down. We’ll arrange it. We’ll compromise.
It won’t make sense to wipe out the whole human race.
Why, I bet if I went to my old Plymouth now
(Of course you’d have to do it the tactful way)
And said, ‘Look here! Who got you the swell French horn?’
He wouldn’t turn me over to those police cars;
At least I don’t think he would.
Oh, it’s going to be jake.
There won’t be so much real difference–honest, there won’t–
And I’d go down in a minute and take my chance–
I’m a good American and I always liked them–
Except for one small detail that bothers me
And that’s the food proposition. Because, you see,
The concrete-mixer may have made a mistake,
And it looks like just high spirits.
But, if it’s got so they like the flavor . . . well . . .