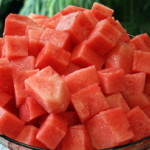 Mamacita says:  The kitchen still smells like watermelon even though I threw out the rinds last night.  I’m sensitive to odors and it’s hard to work in here right now because to me, melons stink.  They stink like skunks stink.  It’s not just a strong odor; they stink.  The windows are open, but I can still smell it.  Tim loves melons and in the summer, he used to buy them as often as he could. Melons represented the best of summer to him.  In his family, people fought wars over who got the last slice of melon.  In our house, he gets it all to himself.
Until this summer, that is.  This is the summer of the high blood sugar, and even though he buys the melons and cheats, he pays for it now.  Once in the store and again with the glucometer.  He’s had to cut way back, with the melons.
I don’t like watermelon.  I don’t like canteloupe, either.  (We call them ‘mushmelons’ around these parts.)
I don’t like any kind of melon, actually. Honeydon’t.

When it comes to food, I’m seven years old in the head and sitting at the table with my arms crossed in front of a plate of good, healthy food that’s grown ice cold, waiting for me to touch it again.
On the bright side, I always taste it before passing judgment. Usually, I give it several chances to impress me.  Sometimes, it wins me over.  Sometimes, nothing on earth works, no matter how hard I try.  Tomatoes and cottage cheese, for example, always look so delicious to me, but when I put a bite in my mouth, I’m still grossed out.  When I’m dining with friends, I can fake it pretty well, and you’ll never know, but it took years of practice before I could pull it off without a grimace.
I also hate onions.  And Brussels sprouts.  And most casseroles. And “flavored” drinks.
Peas make me gag, even at my age.
I don’t eat gravy. The very concept is disgusting.  I’m pretty good at making it, though, and if you want some, I’ll be happy to make some.  For you.  You can have all of it.
Most cooked vegetables make me all sad and unhungry.  Raw vegetables, I love.  Roasted, boiled, baked, not so much.  In fact, not at all.
I’m also not a big garlic fan.  Or pasta, although there are a few pasta recipes I like a lot.
Tim’s family fought wars over who got the last piece of pie.  I don’t eat pie, either, but I do love to make them.  (Exception:  gooseberry pie if it’s really, really sour.)
Most sweet things:  no.  Most sour things:  yes.  Sugar:  no.  Lemons:  yes.
One of the coolest things about being an adult is that, with the exception of a few social occasions when I don’t want PEOPLE to know I’m a food sissy, I can eat what I want and ignore the rest, and not be sent to bed without any Lost in Space for turning up my nose at good, healthy food starving children in Biafra would give anything to have.
Nobody can make me eat melons.  Nobody.  Actually, most days I eat once a day, late at night, unless I meet a friend for lunch.
I guess my question is, “Why am I so fat?”