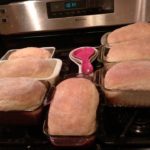 Mamacita says:  So, y’all want to learn how to bake homemade bread?  You’ve come to the right place.  Wash your hands.  We’re going to bake enough bread for you to have some, freeze some, and give some away.

Now, get out the largest bowl you own.  Put about 1/4 cup of yeast in it.  Add a tablespoon of sugar – MUST BE REAL SUGAR, no fakies.  Put in a cup of warm water.  Not hot; yeast is a living thing and you don’t want to kill it.  Your bread won’t rise if you murder the yeast.  Mix it up well.  Let it fester and rise (it’s called “proofing”) for about twenty minutes.  It won’t smell very good.  It’s also fun to watch.  Bring in the kids.

To the smelly yeast in your very large bowl, add five eggs, 3/4 cup of melted butter or vegetable oil (depending on the state of your health), one cup of sugar, 5 teaspoons of salt, and two cups of milk.  Any kind of milk will do (except chocolate), and it doesn’t matter if it’s a little bit sour.  Open up a 5-pound sack of all-purpose flour and dump in ALMOST all of it.  Start stirring, and this will take some time.  Get it mixed together as best you can with a big spoon, and then dip your hands in that remaining flour and start mixing with your fingers.  If it feels at all dry, add more water or milk.  If it feels too goopy, add more flour.  No two batches are the same, and you have to just sort of play it by ear, with bread.  Once you’ve got a bowl full of right-feeling dough, set the bowl in the middle of your very clean kitchen table to rise.  Don’t let it rise on your stove; sometimes, it overflows and you really don’t want that sticky dough down in your stove’s burners.  Set your oven timer for an hour, and go do something else.

When the timer goes off, check your dough.  It should have risen quite a lot.  Don’t worry if it seems to be climbing out of the bowl; that’s a GOOD sign.  Poke the dough with a flour-covered finger; if it doesn’t pop back up, the dough is ready to be kneaded.

Dump all that leftover flour out of the bag and onto your clean kitchen table.  Turn the dough out of the bowl and right into the pile of flour.  Coat both hands, and the hands of any helpers, with flour, and stick them into the big lump of dough and start folding it, pushing it, folding it again, pushing it again, for about fifteen minutes, or five average songs.  (What, doesn’t everybody knead bread to music?  Well, you ought to!)  When your dough doesn’t “pop” when you squeeze a little piece of it, it’s ready to put into the pans. (The kneading’s purpose is to get all the air bubbles out of your bread dough.)

Let the pans sit for about a half hour.  The dough should almost double in size.  If it doesn’t, don’t panic.  Yeast is very weather-sensitive, and sometimes your bread won’t do anything dramatic until it’s in the oven.

After a half hour, turn your oven on to 350 and let it pre-heat.  THEN put a few pans of dough in; my oven holds four pans at a time.  Set the timer for 30 minutes, and go take a shower or something.

When the timer goes off, check your bread; sometimes, it needs a few more minutes, and sometimes it’s done!  Flick the top of a loaf with your fingernail; if the bread is done, it will sound kind of hollow.  Remove the pans and put in another batch.  Don’t forget to set the timer for your second batch, too.

Let the hot bread “set” in the pans for about fifteen minutes, and then turn it out onto a clean dish towel to cool.  Don’t wrap it up until it’s cool, or it will sweat and be damp.  Some people like to brush butter on the tops of the loaves, and some people like the dusty feel and taste of browned flour on the top of the loaves.  Do as you wish there.

If your bread didn’t rise very much, don’t panic.  Eat it anyway; it will probably taste great.  If your bread rose a  LOT, don’t panic either.  Give it a chance.  Sometimes the best-tasting bread is the goofiest-looking.