Mamacita says:  Father’s Day and my daughter’s birthday are always within a few days of each other, and this year, they’re on the same day. That is because calendars are alive and love to mess with us, and because those selfsame calendars, parts of them anyway, dwell in the past with emperors, gods, and goddesses.  We can mess right back by denying our ages.  But I digress.

My daughter is over 21, if anyone wants to ask me any questions.  Please be sure your resume is current, including gainful employment and a love of steampunk and Renaissance cosplay.

She used to be the most beautiful baby girl in the universe, but not any more. She hasn’t been that for a long time.

She is, however, the most beautiful young woman in the universe. She’s strong and brave and smart and hilarious. She’s a lot nicer than I am.  Her sense of direction is almost perfect. Her sense of ethics and behavior are superior. She can sing like an angel. She can walk into an expensive dress shop and walk out with a $300.00 dress that she got for twelve bucks and matching $125.00 shoes that cost eight – the honest way. She’s kind and caring and patient, unless she’s dealing with an idiot in which case she, sadly, takes after me. She’s the best daughter any mother could ever hope to have, even when she takes the occasional pissy fit, and even then a good margarita will fix that mood swing right up. Mommy knows how to take care of her baby girl.

I didn’t teach her to stick her head in a waterfall, but only because the subject never came up. 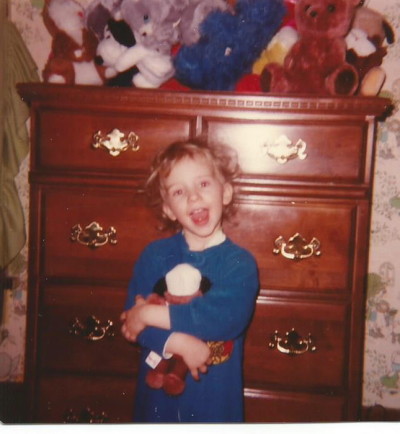 She owns several crowns.  This is only fitting.  She also owns a magic wand, but then, so do I. Do these wands work?  Try us; you’ll find out.

Her cat is obese and has never been outdoors.  By my way of thinking, this means she owns a fairly sentient stuffie.

Sometimes, she wears fairy shoes.  This is in no way strange.  <– no sarcasm intended. This is how we are, in this house.  Why do you ask?

My dad has been gone for several years now, but we never really ever stop missing the people 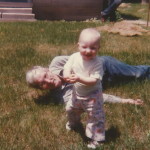 we love. We recover, and get on with our lives, but the memories are still there, and aren’t we all glad they are?

Dad wasn’t perfect, not by a long shot. He and all of his brothers and their father before them were quick-tempered and easy to, as Mom used to say, “set off.” He was also funny and smart; he could sing and he valued education, HIGHLY. He would have been a success at college, but he never went. Instead, he sent four kids through college, and continued to work day after day in a factory, “so we would never have to.”

He taught me hundreds of poems and songs, and he liked to pick me up and stand me on a table and make me sing or recite for people.  (not lately)  “Purple People Eater” and Robert Frost: I still remember.

My sister Teresa and I had a daddy who was playful and laughing. My two younger siblings had a daddy who was cranky and yelling. Dad’s illness began long before anybody realized it, including himself, and the personality changes were just brushed aside as part of the aging process or, possibly, his true colors. Nobody actually said “true colors,” but we all thought it.

By the time dad had had both legs amputated and was bedridden and too weak to feed himself or turn over, we all realized that the diabetes had begun to affect his mind long before it took his body.

He stayed at home and Mom took care of him. I don’t think she went anywhere for three or four years, except her runs to the grocery and drugstores while Dad was at dialysis.  Let me tell you something:  if ever I’m sick like that, I want Mom to take care of me.  I watched her.  She was divinely patient with his dreadful moods, and meticulously careful with his meds and IV’s.

My father is gone, but he still lives in my head, daily. And to that loving and playful and laughing and singing father, I want to say, “Happy Father’s Day, Daddy.”

I knew all along that mean yelling daddy wasn’t really you.  I just wish my two youngest siblings had met that daddy.

So, today, June 15, I salute my beautiful baby daughter and the good daddy I loved.

This is my brother’s motorcycle, by the way.  You know, the one I used to ride all over town without my mother’s knowledge.  She still doesn’t know.  She never will, unless YOU tell her.

I don’t think my brother knew, either.  I was into the stealth before it was cool.  And yes, we all wore helmets because my parents didn’t raise no stupid kids.*