Mamacita says:  Some of this post was written nine years ago.  It is still true.  And I am still a little bit angry.

This post will seem possibly a mite disrespectful. That’s because it probably is. But when a person describes an event, it’s usually from that person’s point of view, so let the chips fall where they may. If I might use that analogy in this particular setting.

Remember that old boyfriend who converted from Tony Manero on the dance floor to Pat Robertson on the camp floor?  (He was so handsome until he turned. . . .)

It happened to him out of the blue. One night we were sitting in the bar at the Greystone Hotel downtown, drinking Margaritas and screwdrivers and getting up to dance every time the band played a song we could recognize, and the next night, we were on our way to a revival meeting at the Church of Disgruntled Believers Who Left Other Churches Because People Who Wore Nude Stockings Were Allowed To Enter. No booze. No tobacco. No dancing. No elbows.

Who made up the rules for this church? The preacher made them up.

I looked around for Kool-Aid but fortunately I did not see any.

We brought his little sister with us. She was around eleven or so.

He had told me to ‘dress accordingly.’ I did wear a skirt, but I was later told that although it was of a ‘seemly length,’ it was made of an ‘unseemly fabric’ and the uneven hem had potential to draw the eyes of even a married man to “heights.”  These people loved the word “seemly” in all its forms, especially “unseemly.”

I was also instructed not to let my elbows show if I decided to return. Elbows were a “private part,” and women should not drive the men to distraction by displaying them.

So, the three of us entered the church. It was absolutely jam-packed-full of people, and smelled like a concession stand that hadn’t been cleaned any time lately. We found seats about four pews from the front, and settled in. Everyone was talkative and seemed fairly normal, barring the dowdy clothes and the weird hats and umbrellas. It wasn’t raining. Everyone had umbrellas.

The old lady behind us looked exactly like Mary Poppins. She struck up a nice old-lady-to-little-girl conversation with the Boyfriend’s sister. A guy I remembered from high school was playing the

At precisely seven o’clock, the placed hushed as though a bowl had been turned over the top of the building. Four old ladies walked down the aisle, sprinkling water from silver dishes, behind them.

The preacher (he was not a minister, sorry, but he was NOT a minister, just a preacher) stalked pompously down the aisle and took his place behind the pulpit. The four old women stood behind him.

The moment he opened his mouth and spoke, the whole place exploded.

I honestly have no clue what he said that night, because I couldn’t hear him. The four women behind him raised their arms into the air and hooted like freight trains the entire time. Everyone in the church went nuts.

They were whacking their umbrellas all over the pews and the walls and each other. They were screaming and crying and singing and making freaky noises that were supposed

to be ‘tongues’ but most of the time it was fairly understandable; plus, the ‘tongue’ people, while looking straight up or straight down, were flicking their eyes from side to side to make sure people were watching them.

Mary Poppins was shrieking like a banshee and hitting the Little Sister with her umbrella, so hard that she almost fell down. It was louder and crazier than many rock concerts I’d been to.

People were running around the room with cans of Crisco, smearing it on people’s foreheads. I had to knock one old man away from me with my foot! He was DETERMINED to put Crisco on my face. And one of them got the Little Sister, who began to cry in terror.

And the crowd scared me. They scared me badly. Some of them were coming after me personally, with those rolled-up umbrellas and their ‘tongues’ and their screaming and prancing and wailing and moaning and Crisco.

You read about Shakers gettin’ down. . . .Shakers had NOTHING on these people.

I looked back across the pews. People were standing on top of them and prancing. There were people dancing on top of the piano. Swinging from the rafters. It was like being at a campus rugby party.  There should have been a keg in the corner.

I was more frightened with every moment that passed by.  It was a living re-enactment of the Doppler Effect – and louder than a train.

Then I looked closely at his Little Sister. She was white-faced and shaking. That’s when I got angry. 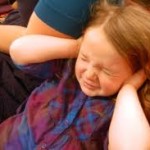 I took her by the hand and together we braved the aisle and aimed for the door. People jumped in front of us, and tried to keep us from leaving. I elbowed them aside with my sinful sensual elbows and led her out.

In the hallway, we looked around and found the restroom. We holed up in there for the duration of the meeting. I would have just left with her, but we were too far away to walk anywhere familiar, and I didn’t have any money for a cab. She sobbed in my arms for an hour.

When things quieted down, we ventured out of the restroom and cased the joint. We found the Boyfriend standing outside in a group of cigar-smoking men (can you spell HYPOCRITE?) and he wasn’t overly pleased with my “behavior.”

All the way home, I told him exactly whose ‘behavior’ needed improvement.

I didn’t expect him to call me again, but he did. Too many times.

I never did know if he was just taking a walk on the wild side, or if he saw me as one of the sinful who needed redemption.

I am a Christian, but I am not a bloody lunatic. And adults who look and dress like Mary Poppins should not terrorize a little girl by screaming in her face and hitting her with an umbrella and attacking her with Crisco.

How dare those people frighten a child like that. I’m still angry on her behalf.

I do not mean to make fun of all churches. No, no, no. I’ve met lovely people in church before. I’ve also met them outside of church.

But I AM making fun of churches that encourage behaviour like I saw that night. And I am making fun of people who behave like those people behaved.

Because, you know, if we don’t make fun of them, we might break down and cry over the complete and utter idiocy of much of the human race.

Perhaps that is why were were given a sense of humor, after all.