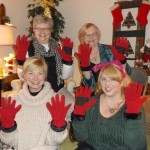 Mamacita says: Another Christmas has come and is almost gone, except for those people who use December 25 simply as an excuse to actually do the things they only think about doing the other 364 days; Christmas for these people is every day. It’s just that we act on the feelings Christmas instills in us in a larger way, instead of the more subtle way we do these same things the other days of the year.  Which is a very awkward sentence,  mixing tenses and persons and leaving parallel structure out in the cold.

It’s Christmas, so let’s leave a lot of things out in the cold.

Bad feelings, for example.  Kick ’em out into the cold and slam the door on them.  Hard.  That list of what we used to call the “Seven Deadly Sins.”  Out into the cold.  All of them.  Wrath. Greed. Sloth. Pride. Lust. Envy. Gluttony. We need exactly none of these things, and none of them has ever done so much as a particle of good for anyone.

I think all seven sins could be summed up with one expression:  lack of self control.  Without self control, people do terrible things to themselves and to others.

If everyone exercised some self control, we wouldn’t have to worry about any of those stupid things.  Even when we call it “self expression” and “freedom” and “rights,”  it’s still a simple matter of rationalizing away a lack of self control.

At Christmas, people with no self control can become monsters.  At all other times, too.

At Christmas, people with self control can become heroes.  At all other times, too.

This is the time of year when good people actually behave like the people we hope we are all the rest of the year.  At Christmas, we discover who we really are, and sometimes we get a peek at who others really are, too.  Most of the time, those peeks show us an almost perfect world.  Sometimes those peeks show us what the monsters under the bed look like.  And who they are.

This Christmas, my sisters and our daughters and I all got wonderful warm gloves from our brother in Idaho, so we sent him a picture of our smiling faces and awesome jazz hands.

I said “awesome” and I meant “awesome.”

My sisters and I are awesome.  So are our daughters.  And our sons.  And our mother, and uncles, and aunts, and cousins, and neighbors.  Our cats are awesome.

And so are you and yours.

Merry Christmas, beloveds.  I can’t quit you, and I don’t want to.

And your little dog, too.