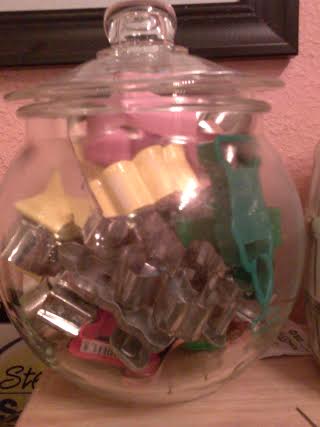 Mamacita says: During the ordinary course of the year, the cookie cutters live in this wonderful cookie jar given to me by my brother the Christmas before my wedding.  He was in high school, but Dr. Steven Byers always did have a knack for choosing a great gift. (I still have the totem pole earring holder he chose for me when he was just a little kid in grade school, and the statue of Pluto – the dog, not the blackballed ex former planet – he gave me when he was about seven.)

At this time of year, the cookie cutters come out of their jar and are put to use.  I am by nobody’s definition or interpretation an artist, so usually I just cut them out and sprinkle colored sugar on them.  All attempts by me to paint a candle-

shaped cookie always turn out vaguely pornographic, and I fully understand my friends’ reluctance to give one to a small child.  The potential for a viral internet picture painting all involved adults in a bad light is too intense.

Tonight I’m baking cookies as though the salvation of the world depended on it.  They will not be beautiful, but they will be delicious.  I’ve, um, “sampled” all the dough (my favorite part of the cookie….) and I speak truth.

In my mind, the holiday cookie cutters are in the same genre as the holiday ornaments: brought out once a year and therefore, in a way, brand new every 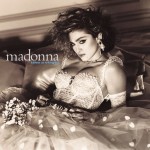 time.   In Madonna’s words:  “like a virgin.”  Well, sort of.  I suppose we could assume that anything, unused for a full year, would be almost like being touched for the very first time.

Again, I digress.  But it was an interesting tangent, and my mind is still working on it.

I could say the same thing about this new batch of final exams, I guess, but somehow the exams don’t involve as much. . . . something. . . . as almost virginal cookie cutters.

Which would be a good name for a garage band:  The Almost Virginal Cookie Cutters and their new album: The Cutting Edge of Christmas.

Come on over.  We have cookies and hot chocolate.  And some leftover cheap whiskey which I probably should have added to the icing, but I didn’t and now the bottle is on the kitchen counter, which no doubt leads visitors to  believe I keep it out there because it’s a handy access.

Believe what you want.