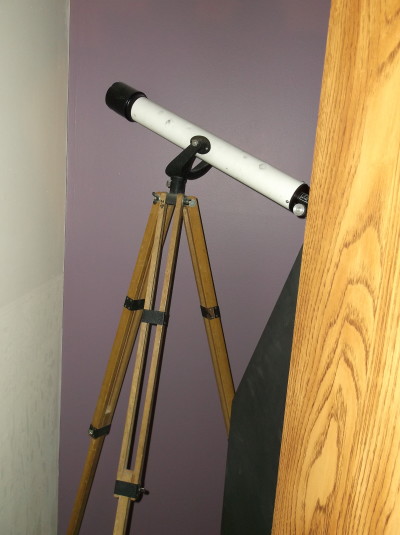 Mamacita says:  At Christmas, or for birthdays (the only times kids got new toys!) other little kids wanted Barbie dolls, sleds, electronics, fake makeup, shoes, sports equipment, and other “typical” kid-desired stuff.  I wanted a telescope.

That’s really all I wanted.  A telescope, a real, not-a-toy telescope.  I’ve never like Barbie; I still don’t.  I rejoiced when my daughter wasn’t a Barbie person, either.  I didn’t want any kind of doll; I just wanted a telescope.

That year, after Mom and Dad came near to pleadin’ with me to name something they could understand and easily purchase, they said they’d try. I mean, that Santa would try.  (Kids who know what side their bread’s buttered on believe in Santa more and far longer than cynical little kids who are too big for their britches and don’t have the negotiation skills smart little kids have).  I crossed my fingers AND my toes and hoped.

Hope really is the thing with feathers. . . .  My hope made my dream of Christmas morning, with me running in with my brother and sisters and seeing a telescope, a real telescope, not a toy, a   telescope on a tripod, with my name on it, seem possible.  And yet, I knew they didn’t really understand, and that a purchase like this would be difficult for them.  I didn’t want what the other kids wanted, and no substitution would do.  A substitution would devastate me, even while I was prepared for something else and a lecture about my own good.

I was obsessed with the night sky.  I used to go outside at night, where the car was sitting on the carport driveway, lie on top of it, and search the night sky with a pair of pink plastic binoculars, dreaming of how much more I’d be able to see on Christmas night with my new, genuine, not-a-toy telescope on a tripod.  Like astronomers had.  I wonder now what the neighbors must have thought at the sight of a little girl lying on top of an old 1959 Chevrolet (the year the fins were huge) as still as a stone for hours.

You don’t need a powerful telescope to see some awesome sights in the night sky, but with a telescope, a real telescope, it was going to be so much. . . oh, I didn’t even really KNOW. . . something.  MORE something.  IF I got the telescope.  IF Santa understood.  Santa was more than a bit provincial at our house.  Santa understand Barbies, but I had my doubts about a telescope.

On Christmas morning, I was afraid to run into the room.  Dad filmed every Christmas morning with his 8mm camera, and I didn’t want to be preserved forever with a look of devastation on my face as I realized that Santa’s idea of a telescope was a toy purchased at Woolworth’s.  I wanted no memories of a Christmas morning that didn’t have a real telescope-on-a-tripod waiting for me.

On Christmas morning, when Dad said “Go!” I walked into the living room very slowly, behind the other kids.  I was scared bordering on frantic sticking a toe into the territory of terrified at what I would find.

What I found was a telescope.  A real telescope, on a tripod, and it was for me.  Mine.  I probably got some other gifts as well, but I have no recollection of them.  All I’d really wanted was the telescope and I got it.

As a matter of fact, I still have it.  It’s still awesome.  It was one of the first things I packed when I got married and moved away from my parents’ house, and it resides in a corner of the living room, behind the TV as I type.

Sometimes, parents who honestly don’t have a clue how to indulge a little girl’s wishes because the little girl is a genetic sport and isn’t like any of the other kids, get it right.  As for the fake telescope under the tree, put there to worry and fool me, I still think that was one of the dirtiest tricks anyone ever played on me, and I refused to even touch it.  Dad opened it to reveal a wrapping paper tube, and nobody understood my disdain for the whole laughing childish lot of them.  🙂 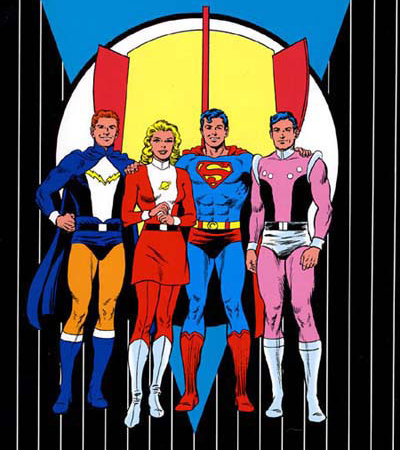 I didn’t have to lie on top of the car any more.  Now I could sit on the front steps, comfortable until the cold stone came through my pants, and look at the night sky and all its glory the way kids in books saw it.  I always identified and warmed to kids in books far more than kids in real life.  Kids in real life played with Barbies. Kids in real life got laughed at in school for drawing picture after picture of planets, stars, comets, asteroids, Lightning Lad, Saturn Girl, Cosmic Boy (before the Legion was rendered forever uncool by new artists and bad writers). . . . Kids in books not only looked through telescopes; sometimes, kids in books got in space ships and WENT UP THERE.

Which is a possibility I still haven’t ruled out.