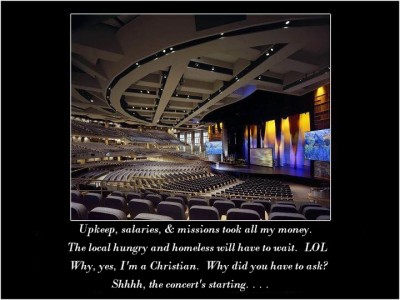 Mamacita says:   I am a sincere believer, but I am also a questioner. I don’t have a problem reconciling science and religion, but I do have a problem with people who do.

I do not enjoy sitting in a large megachurch. When I look around at the opulence, expensive carved wood, tile, chandeliers, huge foyers, multiple buildings, plush carpet, and lavish wall art,  all I can think about is the food, clothing, shoes, books, and school supplies all that money might have bought; instead, this church chose to dress itself up. I don’t deal well with bling. I much prefer literate, well-fed children and libraries.   Churches that spend a lot of money on opulence, bling, and shiny things make me doubt their integrity and intentions.  I also question churches that send most of their resources overseas when there is so much need right next door.

If a church has no hymnals and projects the lyrics to congregational songs on a big projector, I tune out everything that comes afterwards. There’s something a about a hymnal held in my two hands, with dog-eared pages and old songs, that warms my heart and opens my mind. Those lyrics projected high up on the wall are impersonal and creepy. If the lyrics have been sanitized, simplified, and in any way changed, I tune out. Censorship is of the devil – Satan – and has no place in a church or anywhere else. If a congregation is so stupid that it doesn’t understand the words, perhaps these lucky churches should put a dictionary in the pews. Those who in any way change the words of someone else are criminals and enablers of ignorance. The minister might even consider defining the “hard” words for the stupid among the congregation before the singing begins. “Ebenezer” ain’t that difficult, and does exist outside of Dickens’ A Christmas Carol.

I am far too particular about the talent of people who perform in public, and that, sadly, includes a “praise band.” It also includes the choir. This is MY problem, and I realize that, for all voices and talents are important and worthy of a patient and tolerant ear, but I have never had a patient and tolerant ear. In someone’s home, or an elementary school talent show, I can deal with someone being off-key or arhythmic, but in public (and in hospitals) there must be rhythm or, again, I will tune out.  Eagerness, enthusiasm, and self-esteem can’t compete with talent in a public performance.  Yes, I know I’m a snob.

I sit in the back. If the back is already full, I’ll try the balcony. If the balcony is full, or – and I’ve encountered this many times – locked, I will go home. If a stranger attempts to grab me, or pray for me, or in any way invade my personal space, I will freeze up inside and never return. Please keep that sweet, enthusiastic, sincere, genuinely kind and well-meaning old woman or man away from me, for I do NOT appreciate the gushing, the invitations, or the buddy-buddy-ness. If I’m asked to stand and introduce myself, I’ll leave.

People who jump up and down, raise both arms into the air, and shout during the sermon? I consider these people rude and intrusive. God speaks to me in a low, hushed, quiet voice, easily drowned out, and if someone is shouting near me, I can’t 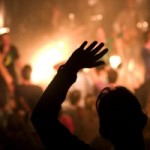 hear God; I can only hear the shouting, flailing human. I used to think people leaped and shouted in church for the express purpose of keeping God’s voice silenced, but now I think some people are so repressed outside of the church that they have to cut loose somewhere. And of course, some people just like to shout at God.

I figure that this post has offended a lot of people in one way or another, or in many ways, even. That’s all right. I’ve been to many churches whose programs have offended me, too. Groups of people have every right to have whatever kind of service they choose, and they certainly don’t have to please me. And, I can pick and choose whatever kind of church’s services I wish, too.

While I’m searching, I’ve been spooked out the door more times than one.  I’m tickled pink that people are so happy with their beliefs that they want everybody to have that same joy, 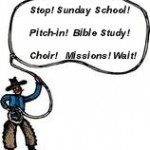 but I wish these people were more perceptive.  Nice people just don’t run backwards across the parking lot to try and corral someone.  There were times I felt as if I were running frantically from a lasso.

I love a church where I can sit anonymously and listen to a learned presentation from a literate person of either sex.  I like to read a list of goings-on and pick the ones that appeal to me.  I love to open a hymn book and sing the original words to lots of hymns. New hymns are often lovely, too, but having only to choose, I’d choose the old songs with the big words.

If there’s a King James Bible there, I know I’ve found a home.

Yes, I know I’m in the minority, especially with the King James Bible.  My personal sermon on that will come later.

That’s my take on organized religions.  Bring it on!