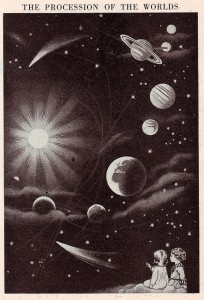 Mamacita says:  With a universe full of wonders out there, at our fingertips and just a little bit beyond, how can so many people be content sitting around watching fake people’s lives on TV instead of getting up, walking out the door, and adding a few wonders to that universe, themselves?

Sure, there’s some great TV out there, but an awful lot of people spend an awful lot of time staring at crazy people: hoarders, teen whores, neighborhood slut conventions, adulterers, moochers, drunks, druggies, criminals, hillapes. . . . not but what the occasional peek through the insane asylum window isn’t a hoot sometimes, but regularly?  Really?

Turn off the TV and go outside.  Seriously.  The kidnappers and murderers aren’t waiting out there to getcha, but the stars and planets are, and so is the moon.  And on the nights when the moon can’t be there, the stars shine all that much brighter to make up for it.

Learning is about making connections.  The more you know, the more you will be able to learn.  Try to learn at least one new, cool word every day.  Learn it thoroughly.  Learn its history; many words, like many people, have fascinating histories.

Peninsula.  Testimony.  Um, you might want to wait until your kids are a little older before you encourage them to make THOSE connections.  Then again, why not give ’em a giggle?

Admit it.  You’re picturing a map of the United States right now, in your head, and you’re looking at Florida in a whole new way.  And you will, for the rest of your life, associate it with the root (heh) word of peninsula.  And also, you now know what that root word means.  Got a pen in your hand?  Pencil? Again, heh.

I’m not going to tell you anything about testimony.  Look it up for yourself.  It’ll be worth your time and trouble.  Also?  If you’re ever in court, you’ll probably be fined for contempt because you won’t be able to stop giggling.

You know.  Like a train wreck, which we’d give anything NOT to happen, but since it did, we can’t take our eyes off it.

Sad.  But I wonder how many of these people would shape up a little if they weren’t experiencing their truckload of freebies and their 15 minutes. . . . .

I suppose reality TV is a kind of education.  For some, it’s inspiration to get their own sick lives on camera, and for others, it’s proof that they really do need to stay in school lest they end up another bad example for the universe.  Laughing stock doesn’t make nourishing soup.