Mamacita says:  Ah, the Arts. Without them, we’d all spend our money on Flintstones mudflaps, gas station black velvet Elvises, Billy Ray Cyrus, ceramic geese (seasonal clothing extra) and anything with Lindsey Lohan, and think THAT was art. Sadly, some people think so now. (Be still, my achy breaky heart. . . .)

Hopefully (that’s for you, Erik Deckers!) you all have also noticed that artists are 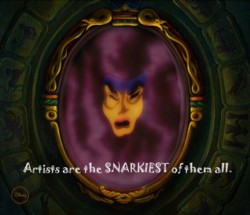 quite possibly the snarkiest of them all. Magic mirrors across the nation agree.  OF THEM ALL!

What could be better than snarky art?  Let me know if you think of anything.  (Food doesn’t count.)  (Unless it’s deep-dish Sicilian pizza from Grecco’s.)  (Which trumps everything else.)

1. Madam, you have between your legs an instrument capable of giving pleasure to thousands – and all you have to do is scratch it. –Thomas Beecham (to a cellist)

2. Pavarotti is not vain, but conscious of being unique. –Peter Ustinov

3. Wagner has lovely moments but awful quarters of an hour. –Gioacchino Rossini

4. Parsifal is the kind of opera that starts at six o’clock. After it has been going three hours, you look at your watch and it says 6:20. –David Randolph

5. All music is folk music. I ain’t never heard no horse sing a song. –Louis Armstrong

6. Opera in English is, in the main, just about as sensible as baseball in Italian. –H.L. Mencken

7. It is a pity that the composer did not leave directions as to how flat he really did want it sung. –Anon.

8. Mine was the kind of piece in which nobody knew what was going on, including the composer, the conductor and the critics. Consequently I got pretty good notices. -Oscar Levant

11. There is a great deal of difference between the eager man who wants to read a book and the tired man who wants a book to read. –G.K. Chesterton

12. He knew everything about literature except how to enjoy it. –Joseph Heller

13. I don’t care what is written about me as long as it isn’t true. –Dorothy Parker

14. Literature is mostly about having sex and not much about having children. Life is the other way round. –David Lodge

15. I’ve read some of your modern free verse and wonder who set it free. –John Barrymore

16. When I want to read a novel, I write one. –Benjamin Disraeli

17. Would you convey my compliments to the purist who reads your proofs and tell him or her that I write in a sort of broken-down patois which is something like the way a Swiss waiter talks, and that when I split an infinitive, God damn it, I split it so it will stay split. –Raymond Chandler

18. Critics are to authors what dogs are to lamp-posts. –Jeffrey Robinson

20. What other culture could have produced someone like Hemingway and not seen the joke? –Gore Vidal

21 An incinerator is a writer’s best friend. –Thornton Wilder

22. I’ve just read that I am dead. Don’t forget to delete me from your list of subscribers. –Rudyard Kipling (writing to a magazine that had published his obituary a little too soon)

23. Someone told me that each equation I included in the book would halve the sales. –Stephen Hawking

24. I am the most spontaneous speaker in the world because every word, every gesture, and every retort has been carefully rehearsed. –George Bernard Shaw

26. The covers of this book are too far apart. –Ambrose Bierce

28. He directed rehearsals with all the airy deftness of a rheumatic deacon producing Macbeth for a church social. –Noel Coward

29. From the moment I picked your book up until the moment I put it down I could not stop laughing. Someday I hope to read it. –Groucho Marx

30. An author who speaks about his own books is almost as bad as a mother who talks about her own children. -Benjamin Disraeli

31. I have been commissioned to write an autobiography and I would be grateful to any of your readers who could tel me what I was doing between 1960 and 1974. –Jeffrey Bernard

32. I never read the life of any important person without discovering that he knew more and could do more than I could ever hope to know or to do in half a dozen lifetimes. –J.B. Priestley

33. They told me how Mr. Gladstone read Homer for fun, which I thought served him right. –Winston Churchill

34. The humour of Dostoevsky is the humour of a barloafer who ties a kettle to a dog’s tail. –W. Somerset Maugham

35. The Compleat Angler is acknowledged to be one of the world’s books. Only the trouble is that the world doesn’t read its books; it borrows a detective story instead. –Stephen Leacock

37. Accuracy to a newspaper is what virtue is to a lady; but a newspaper can always print a retraction. –Adlai Stevenson

38. My favorite poem is the one that starts “thirty days hath September” because it actually tells you something. –Groucho Marx

39. There are only two styles of portrait painting: the serious and the smirk. –Charles Dickens

40. Acting is merely the art of keeping a large group of people from coughing. –Ralph Richardson

41. The play was a great success, but the audience was a total failure. –Oscar Wilde

42. She took her curtain calls as though she had just been un-nailed from the cross. –Noel Coward (of Edith Evans)

43. We are paid to have dirty minds. –John Trevelyan (film censor)

44. Shoot a few scenes out of focus. I want to win the foreign film award. –Billy Wilder

45. There was laughter in the back of the theatre, leading to the belief that someone was telling jokes back there. –George S. Kaufman

46. Try the cock, Albert. It’s a delicacy, and you know where it’s been. –Helen Mirren, at dinner in The Cook, The Thief, His Wife, and Her Lover

47. I grew up with six brothers. That’s how I learned to dance – waiting for the bathroom. –Bob Hope

48. I didn’t like the play, but then I saw it under adverse conditions – the curtain was up. –Groucho Marx

50. Days off. –Spencer Tracy, when asked what he looked for in a film script.