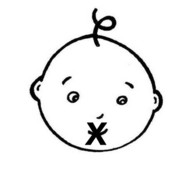 Mamacita says:  I’ve posted about this one before, but for some reason it’s been running through my mind and making me giggle all last night and was still tickling me when I got up today.

When I was younger, I used to use a lot of bad words. I didn’t learn them at home; I  learned a lot of them at Baptist Youth Group and Church Camp, but the habit really  started in college, after I saw Love Story. Jenny used a lot of bad words, and I thought it made her seem cool, and I wanted to be cool, so I imitated her. Then she died, and even the bad words couldn’t save her, so I tried to taper off somewhat, but habits die hard, both good ones and bad, and I was so fascinated by these few words and expressions and the effect they had on staid stuffy old people that they continued to slip out, without any apparent effort on my part. I was an English major. I could make the language glow.

I had potty mouth, and I had it bad. And then I got married. And then I had a baby – a beautiful angelic infant with curly golden hair and a soul of such innocence that when I looked at her, I felt like a privileged peasant raising a princess. And then I had another one – where did these little people COME FROM? – and this one was a red-headed wonder whose eyes beamed “genius” before we ever took him home from the hospital. I had been perfected. And I still used bad words.  Most of the time I didn’t even hear them when they came out of my mouth.

Now, young parents with potty mouth must remember something here. Tiny children learn to speak by imitating the language they hear.

This was an elementary bit of science that hadn’t occurred to me, because whenever we spoke directly to our tiny toddler and our newborn, we used VERY appropriate and pretty mommy/daddy/baby language. Oh, you all know it. That schmoopy pigin we talk to babies and kitty-cats with.

Ah, but it’s always the footprints you DON’T want them to follow, that they pick up on the fastest.

My daughter had a touch of the potty mouth at a most inappropriately young age. She didn’t just babble – she used words absolutely appropriately. I thought it was funny.

Looking back, I’m just appalled at my lack of judgment.

As we drove down to French Lick to the family reunion, I reminded her to be sure not to say, um, certain words there. She agreed. I think she even understood. That bothers me now, too.  She had just turned two years old, and she KNEW we were both using words that weren’t proper.  Then again, she’s a wordsmith, too.  It starts early on.

Sometimes it takes a humiliation to open your eyes and make you shut your mouth.

With this background in place, I will now tell this story that some of you have already heard, again.

His grandparents were lovely people, too, but I was always just a tiny little bit afraid and in awe of them. Dowdy clothes, bun-hair, dark hose, tongues, oil. . . .you get the picture. And no, I’m NOT making fun of them. I loved them dearly and deeply. I am merely DESCRIBING them, which intelligent people can see at a glance.

These precious and wonderful grandparents were hosting a family reunion. Reunions at this huge white Victorian house were so awesome, there is no way I can begin to describe them in this post, but I’ll try at a later date. Norman Rockwell had NOTHING on these lovely people. Sigh. I miss them terribly.

At this particular reunion, their huge table was crowded with Tim’s family, every single one a kind and loving and humorous and incredible person.

My newborn son was sawing logs on Grandma’s big bed, and my daughter was dining with the rest of us at that big table. She was sitting in a red wooden high chair that had been in their family for generations.

At this particular time she was going through a dining phase that can best be described as the “shaved ice” phase. She was thin as a rail, and simply wouldn’t touch most foods at ALL. The grandmothers and uncles and aunts were all worried to death about her, even though she was bright-eyed and energetic and obviously loving the complete control that any kid with food issues has over the adults in her life.

At this meal, she was pressured from all sides to eat this, or that, PLEASE? Just a taste, for Mamaw, for Grandma, for Grandad, for Aunt, Uncle. . . .Skin and bones, SKIN AND BONES, she must EAT. EAT EAT EAT EAT EAT.

Finally, she’d had enough. Catching my eye across the table, she knew better than to disobey the orders about potty mouth she’d been given before we got there, but she’d had enough of the constant nagging about food.

So my princess, my precious baby girl, freshly two years old but talking in complete sentences from the womb, master of innocent satire, stood up in the high chair, put both tiny hands on her tiny hips, swept the room and the people with an exasperated glance, and said, “Oh Mommy, I wish I could say SHIT.”

Nobody laughed. I’m sure they wanted to, but the shock and the environment hushed it all up.

In my mind, I refer to this incident as the Shit Epiphany.

I made so many parenting mistakes, looking back. But really, all I can do about it now is mention them so YOU won’t make the same ones.

Actually, I think I’m making fun of myself. It was one of so many mistakes, I’ve lost count. It just happened to be a very public, noticeable mistake.

For many, many years, I cleaned up my verbal act enough that she had no more of “those” words to mimic. Most of me is ashamed, but part of the shame is in the fact that there is a teeny-tiny* part of me that still thinks it was funny.  Knee-slappin’ hilarious.  In fact, I’m laughing out loud right now.

I’m also ashamed to confess that some of that potty-mouth is back again.

P.S.  * It’s actually not a teeny-tiny part; it’s a humongous big part that almost rolls across the room laughing out loud every time I think about it.  The teeny-tiny part was the shame, and this is, I fully realize, something to be ashamed of, too.  I’ll think about it more when I stop laughing at it.