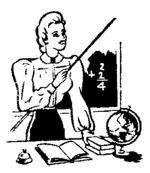 Mamacita says: There is a knack to teaching middle and high school students that some teachers never quite learn. I’m not sure it can be learned; it might be an art, a talent one must have at birth. For want of knowledge of this art’s actual name, I will call it ‘the knack.’

Once in middle school, students are no longer ‘children.’ Oh, we know they still are, but don’t make the mistake of treating them as you would treat a fifth-grader.

Never talk to older students as you would talk to younger ones.

A teacher can lose an entire group of seventh-graders simply by referring to them as ‘boys and girls.’ I’ve seen entire classes turn against a teacher because he/she used a tone of voice that connoted ‘elementary.’ I’ve seen principals wonder all year why the students disliked him/her so much, and it was all because of a condescending remark made on the first day of school, that the adult doesn’t even remember but every student knows by heart.

Never talk down to older students. Or younger ones either, for that matter.

Put simply, talk to older students as THEY THINK you talk to other adults. And put simply, that’s not simple.

It is possible to talk to an older student about very serious matters, or matters that are actually frivolous but which are important to the student, in a tone of voice that tells the pre-teen or teen that you consider them capable of reasonable judgment, and that you respect what they have to say. Two teachers can say the exact same thing and one of them will succeed while the other antagonizes and infuriates the student.

There is some kind of internal attitude inside each teacher, and the least astute kid in the entire school can pick up on it.

Oh, those are excellent parts of a teacher’s background, yes. Definitely. But alone or in any combination, they are not enough.

To be able to deal with secondary students, to be able to communicate and earn their respect, a secondary teacher has to have the right kind of internal attitude.

Can’t some of you still instinctively know when someone is sincere? Do you still have that radar detector in your brain that tells you when somebody can be trusted? Pre-teens have this instinct, and it’s sharp and clear and laced with brand-new hormones, a big hunk of ‘fear of the unknown,’ and an intense desire to be accepted.

A good teacher must understand the pack instinct of teens, and be good at intervening, listening, and helping them to realize that it’s not the best way to live. Some cliques at this level can be brutal; a good teacher watches for such things like a hawk and simply does not permit it
in his/her classroom. A good teacher must have shock absorbers in his/her heart, because some of the things older kids will tell them are real zingers. A good teacher knows how to speak the “language: of all the different social groups within the system. (A REALLY dedicated teacher is bilingual.) A good teacher knows how to encourage individuality and creativity, and be able to stand firm when a student or his parents try to buck the system and gain privileges which that student did not personally earn. Other students know when this happens. Word gets out, and it gets out fast.

Good teachers are probably just a tad on the schizo side, because every time the bell rings, they have to shake off one personality and put on another. No two classes are alike, and a good teacher will not try to teach them in the same way. Secondary teachers are doing stand-up, and audiences differ with every gig.

It goes without saying that a good teacher will not compare a student with his/her older brother or sister, even favorably. Each student stands, or falls, on his/her own merit and work habits. Students respect that, even when they try to sway the teacher. They know that some teachers are easily swayed, more’s the pity. (The good teachers aren’t.)

think one adult talks to another. Read that sentence carefully, for it does not say that a good teacher talks to the students as one adult to another.

Some teachers will not agree with me. That’s fine. All I know is, those things worked for me, and for several other teachers that I know.

I’ll add this, too: A good secondary teachers keeps up. He/she knows what the students are reading, and what they’re watching, and what they’re listening to, and who. This is absolutely vital at this level. If you are conversing with a secondary student and that student happens to drop the name of a band and tells you this band is his/her idol and he/she adores them, and you don’t know ahead of time that this band advocates drugs and violence and kinky sex, and that the lead singer has been arrested for DUI and CDM several times, something ignorant such as “Oh, me too, aren’t they awesome?” might be said. And any teacher who doesn’t know ALL about Facebook and texting and pretty much all other aspects of social networking has no business at either the elementary OR secondary level. Check that stuff OUT, because I’ll tell you what, your students sure are. Get on there yourself so you can communicate.

These things have to be done carefully, remember. Don’t make the mistake of trying to ingratiate yourself with students by using their generation’s groovy, out-of-sight, beat-me-daddy-eight-to-the-bar, gnarly vernacular with them. Some words were never meant to come out of the mouths of actual adults. Am I right, peeps?

All of these things, and more, can be done if a teacher has that internal attitude, the right attitude, the one that can’t be detected by anyone except a teenager. Sometimes, other teachers sense something different about a really good teacher, and there are occasional clashes. Age has nothing to do with it; some of the very best teachers are 110 years old if they’re a day, and some of the least savvy ones are 25.

Middle school kids are the greatest; I loved teaching that age level. Teachers who tell you that those grades are a nightmare just didn’t do it right. Such statements are unkind, and untrue.

I am not, of course, referring to NASTY SPOILED BRATS WHO HAVE NEVER BEEN REQUIRED TO BEHAVE PROPERLY IN PUBLIC, but that is their parents’ responsibility and fault. They should arrive at school already knowing how to behave. But I’ve ranted about that too much already. . . . .

Good parents always go to parent-teacher conferences, of course. While you are there, see if you can dredge up some of that adolescent attitude detection you used to have. Check out your kids’ teachers.

I’m not saying to sniff them all over like a dog, but wouldn’t it be cool if we could? Heh.

At any age, we could all use (to paraphrase Hemingway) a good, built-in shock-proof shit detector. Our students need it for us, and we need it for them.