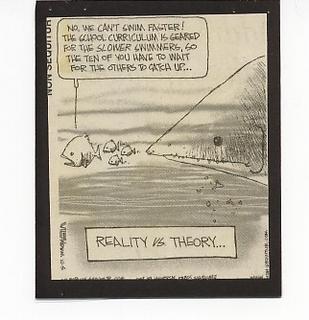 (There are schools who have systems they refer to as “mod systems,” but they aren’t true modular systems; they’re just systems that group kids together all day.  You know, like elementary systems do.)  (Fie on those.)

School has started, and the memories of my first teaching gig are running wild in my head.  That experience was fabulous.  I loved it.  That kind of educational environment doesn’t exist any more in the public schools, and I consider that a tragedy.

It lasted two years, and then the school board decided to go back to ‘traditional’ scheduling. Unfortunately, the new building had not been designed for anything traditional; it was too open. School boards, Congress. . . they’re all political and neither listens to the people they’re supposed to represent.  Unless, of course, someone has big money. Mark Twain could always be counted on to speak the truth.