Mamacita says:  We shopped by putting it on the bill.  Grocery shopping with money?  I don’t understand.  Didn’t everybody just put it on the bill?

I didn’t know how to shop for groceries until I was well into my twenties.  What do you think about that one? 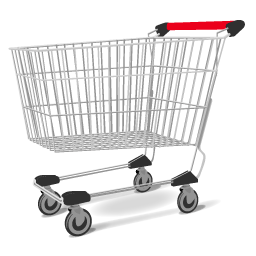 We didn’t NEED no stinkin’ baby seat in our shopping cart. The baby sat with the milk and the baby LIKED IT.

We lived just a few blocks from a small local grocery store/hamburger joint.  There were four of us kids.  Our mom didn’t shop for the week; she shopped for the meal.  With four kids, she never had to run out of anything because there was always a kid handy to send to “the store” for whatever it was she needed.  Often, a kid carrying a bottle of ketchup in a brown paper bag from the store would meet a sibling on her/his way TO the store for bread.  One of us kids went to the store at least once a day for just a few things, or maybe even just one.  We never took money; we put it on the bill.  Every week, my parents would go to the store themselves and settle up.

Put it on the bill, please.

Mom said once that after all her kids were grown and gone, she had a hard time shopping for groceries, herself.  She had to remember that SHE had to go to the store to get it; there were no more little kids to send, six times a day.  🙂  Mom learned how to shop for a week, too.  We’re never too old.

I put a couple of Superman comic books on the bill once.  ONCE.  My younger siblings used to put watermelon sticks on the bill and nobody ever took THEIR hide off.

The hamburger joint connected to the store was like something out of a little kid’s dream.  You could get a hamburger, fries, and small coke, all for thirty cents, with sliced dill pickles in a little white paper cup.  Dad always got a chocolate nut sundae and gave us each a bite.  No restaurant has ever put enough mustard on a hamburger for me, so, like Dad, I would take my hamburger in hand and walk back behind the lunch counter to where the condiments (shut up, bad spellers!) were kept and load more cheap yellow goodness onto the bun.  Then I’d take mine back to the booth, get Dad’s, and do the same for him.  That hamburger place was heavenly, that’s all there was to it.  As a family, we used to walk there, usually with a younger sibling in a stroller, and partake of hamburger bliss.

At most lunch counters back then, the dime coke was almost too big to finish.  We usually ordered the nickel coke. 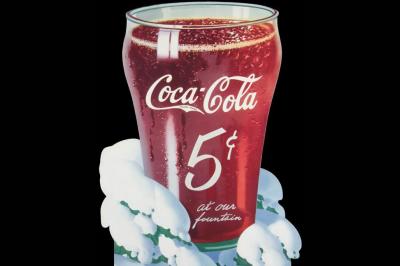 The dime coke was too big, but the nickel coke was juuuuust right.

In the evening, or on Saturdays, the teenagers would fill up the hamburger joint and play music on the jukebox.  I thought they were all adults and I couldn’t wait to be old enough to sing along to “Sugar Shack.”

When I got married, we rented a tiny house way out in the country.  We were buried in snow and ice, and I had to learn how to really shop for groceries, a week’s worth at a time, or even more.  It took a while, but I finally caught on.  There were no little brothers or sisters to send in my place, and we didn’t live in town so nobody could walk or ride a bike to the store for a few forgotten items.  We were literally buried in snow, so we had to shop carefully in case even more snow fell; often, we were actually trapped in our own house.  Nobody could go anywhere.  I had to learn to make lists and add to them whenever I ran out of something.  No more random runs (and I do mean runs) to the store.  Shopping for groceries was now a serious thing.

If you’ve seen me lately, you’ll know that stocking up on food is no longer a problem.  Paying for it, maybe, but making sure there’s some on hand, no.

I dream sometimes about those nickel cokes and that wonderful grocery store and that absolutely awesome hamburger joint, but I always wake up old.  It’s a bit of a bummer.