Mamacita says:  Someone asked me the other day whether I was a liberal or a conservative. I answered truthfully: I don’t know.

It varies with the subject.

It depends on the issues.

Mostly, I think I stand proudly straddling the dividing line, waiting to hear details and facts about  the subject at hand before I speak up.

It seems to me that if you declare yourself to be liberal, or conservative, then certain things are expected of you, and when you fail to deliver those expected things, people are upset.

How can anyone be 100% either way, on EVERYTHING? I don’t think anyone can.

If the truth were told, I think most people have liberal leanings in some areas and conservative leanings in other areas.

What’s the matter with standing in the middle and choosing the battles on which I declare a
liberal or conservative stand, carefully?

Even those subjects on which I lean to the right, there are many paths leading to the left there in plain view, and vice versa. I don’t think I’m 100% conservative or 100% liberal on anything. I have a hard time believing in people who claim to be all or nothing either way.

Is this good? Is this bad? I don’t know. It’s me. If you ask me what I think, I will tell you. After 26 years in the public schools, I’ve seen a lot, both good and bad. I’ve seen parents at their best and at their worst, as anyone does in any job. I am of the belief that it is very hard sometimes for a parent to evaluate his/her own child. Sometimes, we have to step back and look with someone else’s eyes. But even after all I’ve seen, I still believe that most people mean well. Most people are good people.

Unless, of course, they are too stupid to think for themselves, and must rely on a guru of some kind.

Beware of the guru, my friends. A guru is simply someone who’s found an audience of suckers. Suckers with money.

When it comes to certain issues, I proudly take a stand. Even then, I’m a mix of both leanings. Why not? Few things are absolute, and I am a mixture in my definition of absoluteness.

In issues concerning children and young people, I tend to be conservative with a BIG dash of quirkiness and humor. To be conservative and have no sense of humor? God help us all with THOSE people.

In issues concerning politics and religion, I tend to be liberal with a BIG dash of quirkiness and humor. To be liberal and have no sense of humor? God help us all with THOSE people.

And depending on the particular item under discussion, those leanings can turn on a dime.

My mild courteous stance with people who raise welts on tiny children is a tad on the conservative side. Whereas my liberal leanings are demonstrated by my name-calling skills. Just kidding.

But in case there is any doubt, I am far from liberal and far from conservative when it comes to children. I am MYSELF.  If any child stands before me with welts, I will have someone’s sorry ass hauled before the judge faster than anyone can tell me which Pearl chapter tells parents they MUST humble their children and force them to acknowledge their parents as their masters. If you brag that your child would, without hesitation, jump out of the window of a moving vehicle if you so commanded him or her to do so, you are an idiot and a beast. I find this mindset appalling.

I did not have children so I could show off blindly obedient little zombies who flinched when I moved and jumped when I spoke. I had children not just because my birth control pills failed, but because I WANTED children. Real children, with minds of their own.

My children did not misbehave in public. They knew better. We taught them to know better with means other than blood, welts, and tears. We occasionally spanked, but it was with a bare hand on a little bottom, and not with a tree branch on fragile little legs or hands. And we didn’t have to spank very much. I hope it was by example that my children learned how to behave. I’m sure Sara will chime in with her version if I’m wrong.  My children turned into adults – interesting, quirky, hilarious, honest, kind, helpful, generous adults. 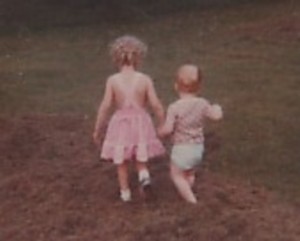 My children are beautiful.

Children are the most valuable things on the planet. They are ours for such a short time. Why do people use those few years to hurt them, and hit them, and make them bleed? The obedience these people seek can be had by simply loving them, and showing them by example. And, ok, once in a while whomping their little bottoms so they don’t run out into traffic or drink Drano. But if a trained seal is what some people want, I wish they’d just steal one from a zoo and let someone with a kind heart and a working brain and some common sense raise the children.  And then rot in jail for theft of the seal.

Elected officials who serve special interests and big business are stealing from our children.  I place them in the same category as those who physically hurt a child.

Now. Am I conservative or liberal? You tell me. I honestly don’t know.

I don’t care, either. It’s not like a label will make any difference.