Mamacita says:  If I owned the biggest and best thesaurus in the universe, I still would not be able to find a word accurate enough to fully express my disgust and loathing of book banning and censorship, nor of the mentality of those who censor.  Let’s not tiptoe around this issue – it’s too important.  It must be grabbed the balls neck and squeezed tightly enough to elicit a scream.  Or perhaps a squeamish, ladylike squeal, from those who advocate censorship.

Because if you dare step into my house and start telling me what we may and may not read or watch or eat or wear or anything else imagined or not imagined, you are in territory you have no right to be in.

Keep your narrow, pathetic, frightened, scripted, dictated-by-others beliefs where they belong: in your own home and nowhere else.

Oh, and I am so terribly sorry for your children.  With a little luck, I hope they can manage to grow up with brains intact, unblemished by your sad belief system and frightened, suspicious, narrow existence.

Harsh?  Hah.  I haven’t even let myself start with you.

1. We can never be sure that the opinion we are endeavoring to stifle is a false opinion; and if we were sure, stifling it would be an evil still. — John Stuart Mill

2. The only valid censorship of ideas is the right of people not to listen. — Tommy Smothers

3. The dirtiest book of all is the expurgated book. — Walt Whitman

4. Think for yourselves and let others enjoy the privilege to do so, too. — Voltaire

5. I am thankful for all the complaining I hear about our government because it means we have freedom of speech. — Nancie J. Carmody

6. Books won’t stay banned. They won’t burn. Ideas won’t go to jail. In the long run of history, the censor and the inquisitor have always lost. The only weapon against bad ideas is better ideas. — Alfred Whitney Griswold

7. Wherever they burn books they will also, in the end, burn human beings. — Heinrich Heine 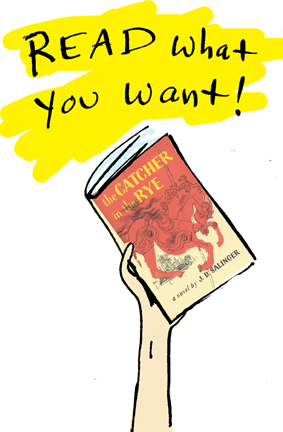 9. Censorship feeds the dirty mind more than the four-letter word itself. — Dick Cavett

10. To choose a good book, look in an inquisitor’s prohibited list. — John Aikin

11. God forbid that any book should be banned. The practice is as indefensible as infanticide — Rebecca West

13. I disapprove of what you say, but I will defend to the death your right to say it. — Voltaire

14. If your library is not ‘unsafe’, it probably isn’t doing its job. — John Berry

15. Your own mind is a sacred enclosure into which nothing harmful can enter except by your permission. — Arnold Bennett

16. There are worse crimes than burning books. One of them is not reading them. –Joseph Alexandrovitch Brodsky

17. Censors tend to do what only psychotics do: they confuse reality with illusion. — David Cronenberg

18. Everyone is in favor of free speech. Hardly a day passes without its being extolled, but some people’s idea of it is that they are free to say what they like, but if anyone else says anything back, that is an outrage. –Winston Churchill

19. You see these dictators on their pedestals, surrounded by the bayonets of their soldiers and the truncheons of their police. Yet in their hearts there is unspoken – unspeakable! – fear. They are afraid of words and thoughts! Words spoken abroad, thoughts stirring at home, all the more powerful because they are forbidden. These terrify them. A little mouse – a little tiny mouse! -of thought appears in the room, and even the mightiest potentates are thrown into panic. –Winston Churchill

20. If librarianship is the connecting of people to ideas – and I believe that is the truest definition of what we do – it is crucial to remember that we must keep and make available, not just good ideas and noble ideas, but bad ideas, silly ideas, and yes, even dangerous or wicked ideas. –Graceanne A. Decandido

21. To prohibit the reading of certain books is to declare the inhabitants to be either fools or slaves. –Claude Adrien Helvetius, De l’Homme

22. Fear of corrupting the mind of the younger generation is the loftiest form of cowardice.
–Holbrook Jackson

24. Books and ideas are the most effective weapons against intolerance and ignorance.
–Lyndon Baines Johnson

25. The burning of an author’s books, imprisonment for an opinion’s sake, has always been the tribute that an ignorant age pays to the genius of its time. –Joseph Lewis 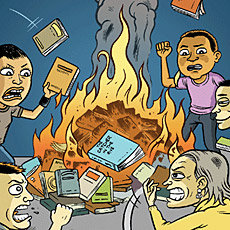 26. Censorship, like charity, should begin at home; but unlike charity, it should end there.
–Clare Booth Luce

27. To forbid us anything is to make us have a mind for it. –Michel de Montaigne

28. Censorship of anything, at any time, in any place, on whatever pretense, has always been and always be the last resort of the boob and the bigot. –Eugene Gladstone O’Neill

30. Censorship is telling a man he can’t have a steak just because a baby can’t chew it. — Kurt Vonnegut

31. An idea that is not dangerous is unworthy of being called an idea at all. –Oscar Wilde

32. Censorship is to art as lynching is to justice. — Henry Louis Gates

33. Everyone has an opinion, and the guy screaming for censorship may be the next guy to have his ideas cut off. — Richard King

35. The only thing that is obscene is censorship. — Craig Bruce

36. If this nation is to be wise as well as strong, if we are to achieve our destiny, then we need more new ideas for more wise men reading more good books in more public libraries. These libraries should be open to all—except the censor. We must know all the facts and hear all the alternatives and listen to all the criticisms. Let us welcome controversial books and controversial authors. For the Bill of Rights is the guardian of our security as well as our liberty. — John Fitzgerald Kennedy

37. We live in oppressive times. We have, as a nation, become our own thought police; but instead of calling the process by which we limit our expression of dissent and wonder “censorship,” we call it “concern for commercial viability.” — David Mamet

38. Censorship: the reaction of the ignorant to freedom. — Unknown 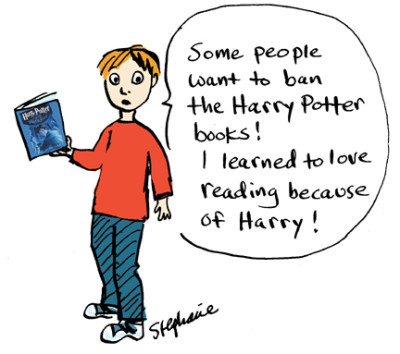 39. He is always the severest censor of the merit of others who has the least worth of his own — Elias Lyman Maggon

40. Even to the present day, we so often condemn books that were written to fight the very things we claim to be fighting. Mark Twain’s (Samuel Clemens’) Huckleberry Finn is so often cited as being racist, when it was written against slavery and racism. — -Jamey Fletcher

41. The most common examples of book censorship are in schools and public libraries, and all those examples are most often involving children’s literature. Political groups attempt to remove books from library shelves because those books use ‘naughty’ words, do not have happy endings… or because they have too many rainbows. Rainbows are considered a sign of ‘New Age’ religiosity. Little Red Riding Hood was the 24th most banned book in the early 90’s mostly because she had a bottle of wine in her basket. Many organizations demanded a non-alcohol Little Red. They were successful sometimes in their efforts, by the way. –Herbert Foerstel

42. There is nothing more frightening than active ignorance. –Goethe

43. One cannot and must not try to erase the past merely because it does not fit the present. –Golda Meir

44. The point is obvious. There is more than one way to burn a book. And the world is full of people running about with lit matches. Every minority, be it Baptist/Unitarian, Irish/Italian/Octogenarian/Zen Buddhist, Zionist/Seventhday Adventist, Women’s Lib/Republican, Mattachine/Four Square Gospel feels it has the will, the right, the duty to douse the kerosene, light the fuse. Every dimwit editor who sees himself as the source of all dreary blanc-mange plain porridge unleavened literature, licks his guillotine and eyes the neck of any author who dares to speak above a whisper or write above a nursery rhyme. –Ray Bradbury

45. I never heard of anyone who was really literate or who ever really loved books who wanted to suppress any of them. Censors only read a book with great difficulty, moving their lips as they puzzle out each syllable, when someone tells them that the book is unfit to read.
–Robertson Davies

46. It is our attitude toward free thought and free expression that will determine our fate. There must be no limit on the range of temperate discussion, no limits on thought. No subject must be taboo. No censor must preside at our assemblies. –William O. Douglas

47. Woe to that nation whose literature is cut short by the intrusion of force. This is not merely interference with freedom of the press but the sealing up of a nation’s heart, the excision of its memory. –Alexandr Solzhenitsyn

48. We trust Americans to recognize propaganda and misinformation, and to make their own decisions about what they read and believe. — American Library Association

49. The use of “religion” as an excuse to repress the freedom of expression and to deny human rights is not confined to any country or time. — Margaret Atwood

51. Purveyors of political correctness will, in the final analysis, not even allow others their judgments… They celebrate “difference,” but they will not allow people truly to be different — to think differently, and to say what they think. –Mark Berley

52. In order to get the truth, conflicting arguments and expression must be allowed. There can be no freedom without choice, no sound choice without knowledge. — David K. Berninghausen

53. The censor believes that he can hold back the mighty traffic of life with a tin whistle and a raised right hand. For after all, it is life with which he quarrels. –Heywood Broun

54. We are not the keeper of our brother’s morals – only of his rights. –Judith Crist

55. To prevent inquiry is among the worst of evils. –Thomas Holcroft

56. The First Amendment says nothing about a right not to be offended. The risk of finding someone else’s speech offensive is the price each of us pays for our own free speech. Free people don’t run to court — or to the principal — when they encounter a message they don’t like. They answer it with one of their own. –Jeff Jacoby 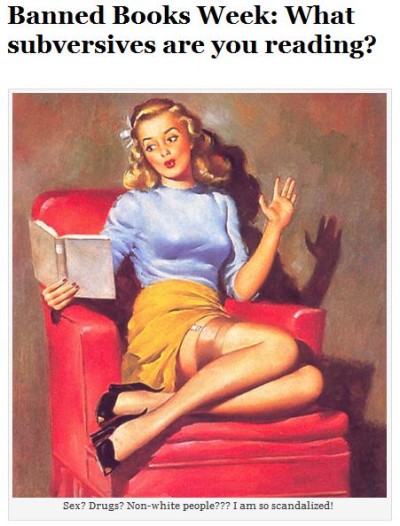 57. Political correctness is the natural continuum from the party line. What we are seeing once again is a self-appointed group of vigilantes imposing their views on others. –Doris Lessing

58. If none of us ever read a book that was “dangerous,” had a friend who was “different,” or joined an organization that advocated “change,” we would all be the kind of people Joe McCarthy wants. — Edward R. Murrow

59. Obviously, the danger is not in the actual act of reading itself, but rather, the possibility that the texts children read will incite questions, introduce novel ideas, and provoke critical inquiry. –Persis M. Karim

61.  If you don’t want your child to read a particular book, that’s your choice.  But please don’t attempt to dictate such choices for the rest of us.  — E.R. Frank

62.  No one should have the power to decide what other people’s kids may or may not read.  – Lisa McMann

As Inigo Montoya would say, “Let me sum up.”  Here it is.

Censorship is for chumps.  Smart people won’t tolerate it.