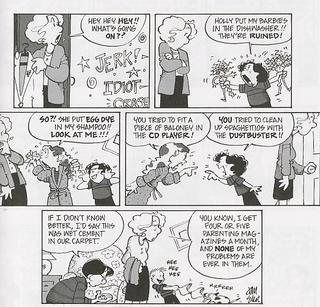 Mamacita says: Magazines are not written for me.  When my kids were little, I used to subscribe to several parenting and household magazines, and few if any of my problems were ever featured anywhere in there. Maybe on the joke page, but never in an article with advice and solutions. Where were the articles about snakes and albino rats and a garden full of rotten tomatoes and little boys, and how to hang a swing on a tree when the branches are all taller than a four-story house, and how to tell a good yard sale from a bad yard sale just by reading the ad so I wouldn’t waste gasoline driving in from out in the country, and how a handful of chocolate chips won’t hurt your child in the long run, and how to pack a school lunch when neither of your kids like sandwiches, and what to say to a school aide who made your kid sit at the back table because his lunch was smelly, and what IS that smashed thing on the carpet, and how do I persuade a raccoon to get the heck out of my kitchen, and is there really such a thing as clothes my size that really are flattering or is that just condescension, and how do I get all that sand out of the car’s carpet without shelling out the big bucks at the car wash. . . . Etc.

It’s still that way. Magazines don’t talk to me. I’m not sure who they are talking to, but it’s somebody way richer and more normal than me.

Now, my kids are grown so I don’t subscribe to parenting magazines any more, but I like to read magazines about Beautiful Homes.   Surprisingly, my own admittedly unique problems are NEVER in there, either.

For example, today I walked into the big bathroom and saw three slices of pepperoni on the sink. Where did they come from? Why are they there? Nobody in the publishing world can tell me. Nobody in the house seems to know, either.  I’d also like some advice on how to remove that mysterious footprint from the hall ceiling.  And why is there a watermelon growing out of the cat’s litter box?

As for the Cooking magazines, well, most of those are not for the likes of me.

See, when I read an article called “Quick and Easy Summer Meals Your Whole Family Will Love, Using Ingredients You Already Have In Your Pantry,” I do NOT expect the first recipe to start out with “Sprinkle 2 tsp. of saffron and 1/4 cup freshly-squeezed lime juice over two pounds of octopus, let marinate for an hour, and grill, grill, grill!”

Whose family, and whose pantry, are they talking about? I love to cook and bake and I keep a pretty good inventory of spices and herbs, but SAFFRON? Who can afford saffron?

Lemons. I have no limes, but I always have lemons. The octopus I don’t have either, but maybe I could substitute the frozen catfish that’s been in the freezer since. . . . well, for a while.

I guess I can make this dish anyway, by substituting lemon for lime, paprika for saffron, and catfish for octopus. Do you think anyone will notice?

Not in this house they won’t.

I’d also buy a magazine that told me what to say to a daughter who had to take her beloved cat to the vet and have it put down, and whether I should sneak into her apartment and put away its dishes and toys before she got back or whether it would be therapeutic for her to do that herself, and how do I comfort my son after all those funerals, and in a house full of diabetics, where did all this candy come from, and how do I keep a watermelon plant alive if it’s apparently thriving in cat litter and might not want to be moved at this point in the summer, and why didn’t I notice it before since I sift that litter every single night?  Okay, it’s usually pretty dark when I “do” the litter box but still.  It’s a pretty big watermelon plant, and there are blossoms on it.

(By the way, if you haven’t already discovered “Stone Soup” by Jan Eliot, you’re missing out on a really wonderful comic strip. It’s one of my favorites.)