Some of this appeared in 2006, in case you think you might be losing your mind.  Then again, maybe you are.  I’m no diagnostician. 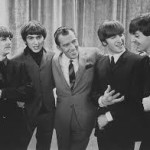 Mamacita says:  Most of you are too young to remember when the Beatles first appeared on the charts in the U.S. I was in grade school, but I remember. My parents watched Ed Sullivan, and I remember them wondering who these Beatles were, and why Ed Sullivan would have them on his erreally big shew.

This might have been the first time I knew of something before my parents did. The kids on the playground had been talking about the Beatles and I was intrigued.  The birthday party I went to featured Beatles songs, individually played on 45’s.  (Look it up, young ones.)  The birthday girl got a lot of Beatles paraphernalia.  (No, not THAT kind.)  And when their pictures began to appear all over the place, and my parents began their “long hair, terrible clothes, etc” shpiels, they became even more intriguing. I started 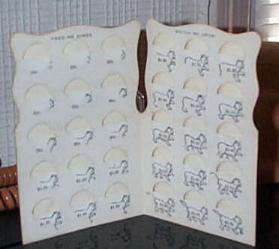 saving my money – my big quarter-a-week.  Every time I got a dime, I put it in the Dime Kitty – free to all children courtesy your local bank – and the kitty grew more and more complete, and when it was full, I took it to Kresge’s and bought. . . . . a record album. You know, the BIG one.

I bought “Meet The Beatles.” It was the first record I ever bought with my own money.

I brought it home, took it out, placed it on my little red metal record player, the one Santa brought me when I was about five; you know, the one that folded up into an easy-to-carry-from-room-to-room little suitcase, sat back, and listened. It was the first time anything besides “The Andy Panda Polka” and the like had ever been experienced by that little red

By the time Ed Sullivan introduced The Beatles, I knew all the songs on that album by heart. When the band started to play, I sang right along. My parents honestly did not know what to think about that. I remember how they looked at each other, and at me. Maybe they, too, sensed that they were losing part of me to. . . something.

When I look back at how the Beatles appeared back then, it’s funny to think that old people considered them long-haired and sloppy. Their hair was tidy, and they wore SUITS, for pete’s sake.

When the camera panned on John, the caption below read “Sorry, girls, he’s married.”  The audience full of teens shrieked and screamed throughout the entire set.

As I watched the Beatles perform, and listened to that album, thoughts were popping up in me that had never popped up before.

I wanted to wear a bra*. I wanted to learn to play the guitar. I wanted different hair, and different clothes. My bike looked childish. I lost interest in comic books. Bazooka bubble gum lost its charm.  My cigar box almost full of Bazooka Joe comics gathered dust.  I put my skate key in a drawer.

All I wanted to do was listen to that album, sing along in my head, and wait for the next unfamiliar thought to start.

It was the end of an era for me, and the beginning of another.

*not a stretchy plain white beginner one, either.