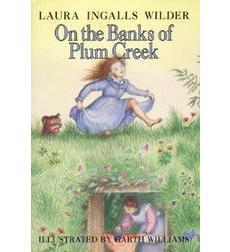 Mamacita says:  My daughter was seven when she asked the question I’d been dreading for seven years:  “Mommy, is there really a Santa Claus?”

However, thanks to Caroline Quiner Ingalls, I knew exactly how to answer her.  And, this answer fully satisfied my little child, and me.

Laura and Mary already knew that Santa Claus traveled with a pack mule on the prairie, since there was seldom enough snow for his sled, 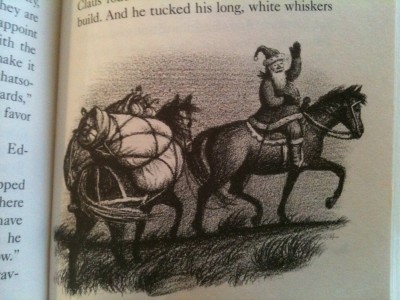 but they had been worrying because their little house on Plum Creek did not yet have a fireplace or chimney.  :

. . . then Laura had a chance to speak without interrupting.  She said “There isn’t any fireplace.”

“Whatever are you talking about?”  Ma asked her.

“Eat your supper, Laura, and let’s not cross bridges till we come to them,” said Ma.

Laura and Mary knew that Santa Claus could not come down a chimney when there was no chimney.  One day Mary asked Ma how Santa Claus could come.  Ma did not answer.  Instead, she asked, “What do you girls want for Christmas?”

“Of course there’s a Santa Claus, said Ma.  She set the iron on the stove to heat again.

“The older you are, the more you know about Santa Claus,” she said.  “You are so big now, you know he can’t be just one man, don’t you?  You know he is everywhere on Christmas Eve.  He is in the Big Woods, and in Indian Territory, and far away in York State, and here.  He comes down all the chimneys at the same time.  You know that, don’t you?”

“I guess he is like angels,” Mary said, slowly.  And Laura could see that, just as well as Mary could.

Then Ma told them something else about Santa Claus.  He was everywhere, and besides that, he was all the time.

Whenever anyone was unselfish, that was Santa Claus.

Christmas Eve was the time when everybody was unselfish.  On that one night, Santa Claus was everywhere, because everybody, all together, stopped being selfish and wanted other people to be happy.  And in the morning you saw what that had done.

“If everybody wanted everybody else to be happy, all the time, then would it be Christmas all the time?”  Laura asked, and Ma said, “Yes, Laura.”

–from On the Banks of Plum Creek, by Laura Ingalls Wilder

P.S.  If your children don’t know all about the Little House books, you are not a good parent.  I’m not kidding.  Bring it on.