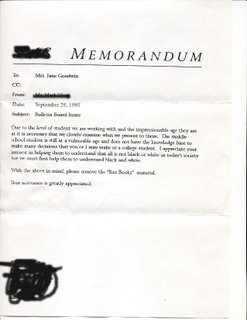 Mamacita says:  Banned Books Week is coming up this month – Sept. 30 – Oct. 6, 2012.  It always saddens me to be reminded that there are such huge hordes of ignorant masses in the United States, and yet, sigh, there they are, forbidding this and banning that lest their children learn something their parents hadn’t already run through the personal values laundromat since, heaven forbid, the kids might come home asking questions and – we can’t have it, we just can’t HAVE IT – thinking.  Maybe even. . .  ASKING QUESTIONS!  (shudder)

First of all, I despise censorship. Banning books is akin to banning people; both are abhorrent to the collective intelligence, and both bring us down as a culture. It’s one thing for someone to decide that a certain book will not be allowed in his/her house – every parent has that right – but it’s quite another thing for this person to decide that a certain book will not be allowed in my house, or yours. Or in a library, or school; for one person, or a handful, to be allowed to dictate what the masses might be exposed to is ridiculous, cowardly, stupid, and evil. Someone is offended? There are choices. Such people can remove themselves and their children from the nasty thought-provoking sources. They could also grow a pair and encourage thinking and questions, but that’s too hard and scary for such people, I suppose. God forbid their children might come home from school with. . . . ideas. Brrrrrr, can’t have it. Besides, people who advocate censorship and book burning banning don’t usually know the answers; their thoughts are scripted by others.  It’s a lot easier to live that way; thinking for oneself can be so hard, you know.

Many book censors are too insecure in their own backgrounds and beliefs to risk questions from others, and a huge lot of them are just plain too ignorant to deal with anything that isn’t very, very simple.  Learning is hard.  Stick with what we already know.  Go that extra mile to make bloody sure our kids aren’t exposed to anything that might threaten what these adults consider “safe.”  Again, every parent has this right – in his/her own home.  Outside of that home, guess what?  Other people have rights, too.  Imagine.

This post is a rerun, but before Banned Books Week actually begins,  I want to share with you again this memo from a college-educated man who was in charge of a building full of impressionable middle school students.

I firmly believe that any memo, letter, or piece of written information that is sent by an administrator, should contain no idiocy or errors.

I also believe that any memo, letter, or piece of written information that is sent by an administrator that DOES contain idiocy or errors should be posted publicly and that the general public should be allowed to mock it.

I suppose that my belief that administrators should be required to be intelligent and able to proofread would be thrown out by the PC police.

This is the letter a principal gave me several years ago, demanding requesting that I take down my bulletin board about Banned Books Week. I had used that same bulletin board for over ten years, and in those earlier years, he had actually praised it for being timely and creative. That was, of course, before he saw Waldo on there. This is the same school system that had a virtual meltdown because I was bringing in speakers; the curriculum director didn’t want me to bring in people from the outside to talk about careers because, and I quote, “it might give the students ‘ideas.'” These people volunteered their time, and would have continued to volunteer their time, and it would have been of enormous benefit to the students, but no. Ideas are scary, and, to the ignorant, dangerous.

A few years later, the same man who denied permission for me to bring in speakers for free, spent nearly a million dollars of taxpayer money to take all the middle school students to town and have paid speakers talk to them about the same thing I could have done for free. By this time, you see, the Trend Wheel had spun back around, and it was now permissible to give the students ‘ideas.’

One of those speakers represented General Motors, and her speech was 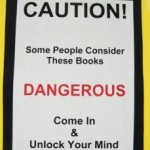 excellent, although it didn’t sit well with administration. She spoke about high school ‘graduates’ for whom a diploma was nothing but a piece of paper that connoted untruths. She spoke about how an employer should have the right to assume that a diploma pretty much guaranteed literacy and general competence. She spoke about all the money big corporations were having to shell into remedial programs for employees who had diplomas, pieces of paper that represented four years of showing up and not much else. She spoke about how businesses would really appreciate a diploma that told the truth: that if a student had been graduated out of respect for really trying, the diploma should say so, discretely of course, but in terms that the business world would be able to interpret. If the student was just going through the motions of graduation for self-esteem’s sake, the diploma should say so. And if the diploma was rightfully earned because the student had become fully literate and generally competent and had genuinely and individually and truthfully learned how to care for himself/herself in the world in general, the business world should be able to see that kind of diploma and interpret it for what it was: a real diploma.

Oohh, the remarks that were scattered throughout the auditorium. And when we returned to the individual buildings, there was much talk of blueberries and self-esteem.

My friends are mostly lawyers, musicians, writers, speakers, businesspeople, and other educators. Before the edict went out, I often had one of them come to my classroom and talk about what they did all day, and then the students would ask questions. Silly me, I really thought it was helpful.

Sure, they asked my lawyer friends about their individual rights and stuff, but. . . . .

We certainly can’t have our students understanding their basic civil rights and those of their fellow citizens of any age, now can we.

What a narrow escape.

P.S. A few years later, I dared to submit a speaker proposal for my classroom again, and it was again turned down, but this time the reason was different.

Apparently, it was unfair to other students if one group got to have a speaker and others didn’t. I suggested that other teachers could just as easily invite a speaker into their classroom, too, but nobody else cared to go to the trouble, so I couldn’t, either.

Are our schools in trouble? Darn right they are, and most of it isn’t coming from the students.

Censorship and book banning, indeed. If our society gets any more politically correct, it will be so boring and insipid and cowardly, it will be indistinguishable 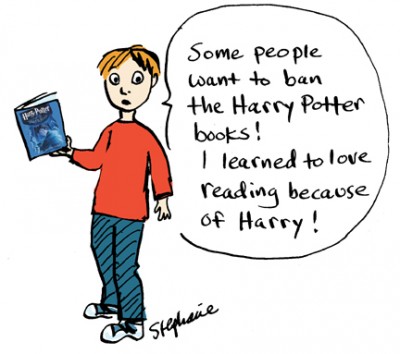 from an ant colony.

Except, of course, that ants are not cowardly.

Book banners are, though.

Censors.  The lowest common denominator of humanity.  Can there be anything lower than those who strive to keep the rest of us in the dark?  Those who fear creativity, ideas, questions, and knowledge are somewhat less than human, by my way of thinking.  The human being was created to soar, not bury its head in the sand of fear.

Do I read banned books?  I do.  And so should you.