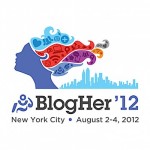 Mamacita says:  I’ve only just returned from New York City, where the best BlogHer conference yet was held.  While I may be home now, my head and heart are still mingling with the 5,000 women (and men) in the Hilton hallways and session rooms.  Oh, and behind the registration desk, which is the best job EVER because everybody has to register, so the volunteers there get to see everybody.

My roommate was the fabulous Fausta , who is quite possibly one of the kindest, most interesting, and just basically one of the loveliest  (inside and out!) people I’ve ever met.  I miss her already. Love you, Fausta.

I thought the BlogHer sessions were wonderful this year, too.  Late on Friday afternoon, during a panel made up of three of my favorite people (Neil, Laurie, and Schmutzie), a topic came up that I wanted to comment on; sadly, while I can speak to a crowd with relative ease, I am far too backward to comment on someone else’s session in public.  Out loud.  You know, where PEOPLE can hear.  However, there was something I wanted to say, and I’m going to say it here instead of there.

The question was: What is the Blogosphere for?  Money?  Fame?  Personal venting?

In speaking of whether or not bloggers should go for the money, I am of two minds – possibly more than two.

If a blogger is offered payment for doing what he/she would be doing anyway, I say “go for it.”

If a blogger is offered payment for doing what a business orders him/her to do, regardless of the blogger’s personal ideals, I say “when pigs fly.”

However, what I wanted to say most was this:  I think the best and – in my opinion – the most important thing about the Blogosphere is that it is the village without which we cannot most effectively and wisely live our lives.

Before you start, I already know that people have been living their lives effectively and wisely ever since there have been people, but in the 21st century, an era in which so many people are isolated – far away from parents, family, and others who have nourished them through their formative years, the Blogosphere can provide a support the likes of which is unparalleled in human history.

We learn here, among writers from the United States and Australia and France and Pakistan and Outer Mongolia, that being ethnocentric simply makes no sense.  It never did, but proving it was harder.  Now, someone in Venezuela can tell someone in Scotland that a crying baby doesn’t necessarily mean a distressed baby.  Someone in New Zealand can counsel someone in Alabama about a spouse’s infidelity.  Someone in Latvia can assure someone in Nova Scotia that it’s normal to feel depressed after having a baby.  Someone in Nigeria can prove to the universe at large that not everyone there is a prince seeking a sympathetic soul to deposit the crown jewels in his/her checking account in return for a cut when the boat docks.

In the Blogosphere, we learn that no matter where or how someone lives and what he/she looks like, our hopes, dreams, problems, heartaches, aspirations, etc, are intrinsically the same.  We all want our children to be healthy and happy.  We all want to be loved.  We all have to eat and sleep, and we all wear clothes.  Well, most of us, anyway.  Every culture has courtship, and mealtime, and infidelity, and birth, and death, and marriage, and friendship, and children, and jobs, and abuse, and religion, and politics, and sports, and education, and tragedy, and accidents, and miracles, and conflicts.  In every culture, most people are nice, and genuinely want to help each other.  Until recently, our knowledge of these desires was limited.  Now, our knowledge is global.  The Blogosphere has brought us together.  REALLY brought us together.

The Blogosphere has shown us that our mealtimes don’t have to consist of the same old thing week after week. Want some suggestions about dinner?  Google it.

We know that not all rashes, sneezes, bruises, etc, are fatal, because someone in Chad posted about being overly concerned about trivial childhood injuries.

We know that the mole on a loved one’s neck should be looked at by a doctor, because someone in the Yukon Territory posted about waiting too long to have his/her own mole checked out.

New parents, empty-nest parents, recently divorced people, grieving people, rejoicing people are reassured.  The Blogosphere gives us proof that real people are turning their lives around, educating themselves, coping, enduring, laughing, crying, and generally all doing the same things, sometimes in the same way, sometimes in different ways, but still doing.  We all hope, and dream, and long for friendship and love and cool shoes, which we sometimes find a thousand miles away on the feet of a blogger in Kyoto, and which we can order from the same Japanese shop.

Lives have been changed and even saved because someone on the other side of the planet posted something.

The Blogosphere has proven that cultural universals exist outside the pages of a sociology textbook.  We really ARE alike in more ways than we are different, and our differences are not to be feared, either.

In the olden days, generations lived together in one place, even in one home, and there was always someone more experienced to give actual advice that really worked.  Now, few houses are multi-generational, and new parents are on their own, except for a few thousand well-intentioned advice books, none of which was written about your specific, individual child, or a child who resembled yours.  The Blogosphere, however, houses a LOT of people in your situation who have tried, rejected, tried, and found success at whatever you’re trying to do.  And, if they haven’t found success, they can at least sympathize in a knowledgeable and empathetic way.

We are not alone.  We were never alone.

If you receive monetary compensation for your interpretation of this, good for you.  If you do not, good for you, too.

It would have taken too long to say this in a spoken comment, anyway.