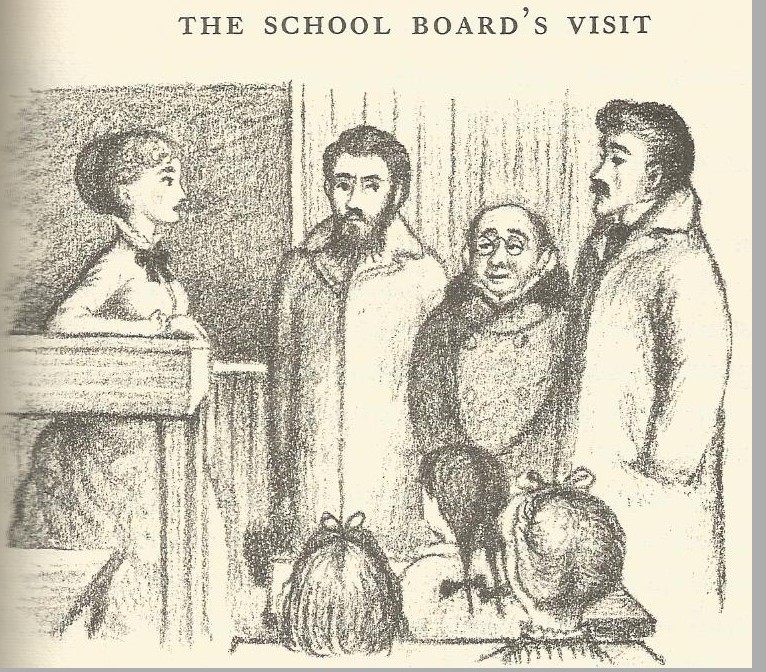 Mamacita says:  I’ve been a hugely obsessed fan of Laura Ingalls Wilder and all of her books since before I could read.

I first visited the Laura and Almanzo’s Mansfield, Missouri, home when I was in college, and at first was puzzled by the big electric fan on the porch – Laura, with an electric fan?  This was my actual realization that she had lived through a multitude of discoveries and inventions, and of course would have electricity.  Heck, they had a car.  Etc.  Laura had been a savvy, sociable, stylish, knowledgeable girl, and was the same as a woman.

My whole family loves Laura.  As a family, we traveled to Mansfield, MO to visit her and Almanzo’s beautiful home there.  My mother has been several times with her friends.

One of my favorite chapters in Little Town on the Prairie is “The School Board’s Visit.”  Laura fans will remember that Almanzo’s older sister Eliza Jane was teaching school in DeSmet while Laura and Carrie were there, and that Miss Wilder was perhaps the world’s worst teacher.  She treated all of the students, even the young ladies, as if they were babies; she condescended to them (worst possible thing to EVER do to a student of any age!) and said things like “. . . birds in their little nests agree!” in tones that made even good girl Laura squirm in her seat.

Miss Wilder’s classroom control was non-existent; she never punished anyone, so first the little boys, then the little girls, and then even the big girls, began to disregard rules, stopped studying, and the classroom became a nightmare.  That’s what happens when you treat kids like babies, and never follow through with anything.

The school board finally came to Miss Wilder’s classroom, and one of my favorite conversations ensued:

Pa looked at Charley and his eyes were twinkling.  He said, “Young man, I hear you got punished for sitting on a bent pin.”

“Oh, no, sir!”  Charley replied, a picure of innocence.  “I was not punished for sitting on it, sir, but for getting up off it.”

I still think this is hilarious.

And then Pa, as head of the school board, told the students to behave themselves.  “We want a good school, and we are going to have it.”  When Pa spoke like that, he meant what he said, and it would happen.

Wouldn’t it be loverly if our classrooms could be like that?  Students behaving properly because it was the right and decent thing to do?  And to have every student there understand that there would be serious consequences for misbehavior?  In a perfect world.

P.S.  When Laura’s daughter Rose was a pre-teen, she went to live with her Aunt Eliza Jane in Louisiana, as the schools in Mansfield weren’t advanced enough for her.  (Rose was extremely gifted.)  Eliza Jane had married later in life to a widower with grown children, and when her husband died, his children took everything, even Eliza Jane’s wedding ring.  Rose finished school in Louisiana and became a telegraph operator and then a reporter and real estate agent, as was her husband, Gillette Lane; they lived in San Fransisco for a while, and in 1915,  Laura took the train to California to visit them during the World’s Fair.  Rose and Gillette were later divorced.  They had no children, so Laura and Almanzo have no direct descendents.  They had only one other child, a boy, who died when he was so young he hadn’t even been named yet.

And now I shall stop lest I keep going and give you a complete history of these beloved people.

P.P. S.  I have to say one more thing about Rose:  she was the oldest Vietnam war correspondent, and had a home in Albania with her friend Helen Boylston (Sue Barton!)  My favorite of Rose’s books is Let the Hurricane Roar, but if you search for it, be sure you get the original; it’s been edited,  edited books are never as good.  Her characters were named Charles and Caroline, after her grandparents, but the editor changed them to Molly and David, and renamed the book Young Pioneers.  Such a stupid move, as are all edited versions.

All the books in the series have been “updated and made more relevant,” which means they’ve been murdered and bespoiled, and tons of cool stuff has been left out, so don’t waste your time with the new versions; find the originals; they’re ALWAYS better.  Censors and editors are Satan.  Yes, THAT Satan.

One more thing:  I do love it when a misbehaving child gets what he’s asking for.  It seldom happens in real life these days, but in our beloved books, things are still done right.