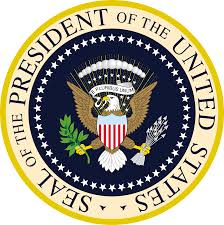 The official seal of the President of the United States.

We have had forty-five presidents now.  Each is represented by one of his quotations, while in office.  Enjoy.

2. I pray Heaven to bestow the best of blessing on this house (the White House) and on all that shall hereafter inhabit it. May none but honest and wise men ever rule under this roof! — John Adams (1797–1801)

3. That government is best which governs the least, because its people discipline themselves. — Thomas Jefferson (1801–1809)

4. I believe there are more instances of the abridgement of the freedom of the people by gradual and silent encroachments of those in power than by violent and sudden usurpations. — James Madison (1809–1817)

5. It is only when the people become ignorant and corrupt, when they degenerate into a populace, that they are incapable of exercising their sovereignty. Usurpation is then an easy attainment, and an usurper soon found. The people themselves become the willing instruments of their own debasement and ruin. — James Monroe (1817–1825)

7. As long as our government is administered for the good of the people, and is regulated by their will; as long as it secures to us the rights of persons and of property, liberty of conscience and of the press, it will be worth defending. — Andrew Jackson (1829–1837)

9. A decent and manly examination of the acts of the Government should be not only tolerated, but encouraged. — William Henry Harrison (1841)

10. Let it be henceforth proclaimed to the world that man’s conscience was created free; that he is no longer accountable to his fellow man for his religious opinions, being responsible therefore only to his God. — John Tyler (1841–1845)

11. No president who performs his duties faithfully and conscientiously can have any leisure. — James Knox Polk (1845–1849)

12. I have no private purpose to accomplish, no party objectives to build up, no enemies to punish—nothing to serve but my country. — Zachary Taylor (1849–1850 )

14. The dangers of a concentration of all power in the general government of a confederacy so vast as ours are too obvious to be disregarded. — Franklin Pierce (1853–1857)

16. America will never be destroyed from the outside. If we falter and lose our freedoms, it will be because we destroyed ourselves. — Abraham Lincoln (1861–1865)

18. Leave the matter of religion to the family altar, the church, and the private school, supported entirely by private contributions. Keep the church and state forever separate. — Ulysses S. Grant (1869–1877)

20. Next in importance to freedom and justice is popular education, without which neither freedom nor justice can be permanently maintained. — James A. Garfield (1881)

25. Unlike any other nation, here the people rule, and their will is the supreme law. It is sometimes sneeringly said by those who do not like free government, that here we count heads. True, heads are counted, but brains also . . . — William McKinley (1897–1901)

31. Absolute freedom of the press to discuss public questions is a foundation stone of American liberty. — Herbert Clark Hoover (1929–1933)

32. Happiness lies in the joy of achievement and the thrill of creative effort. — Franklin Delano Roosevelt (1933–1945)

34. There is nothing wrong with America that the faith, love of freedom, intelligence and energy of her citizens cannot cure. — Dwight David Eisenhower (1953–1961)

35. If we cannot end now our differences, at least we can help make the world safe for diversity. — John Fitzgerald Kennedy (1961–1963)

37. Always give your best, never get discouraged, never be petty; always remember, others may hate you. Those who hate you don’t win unless you hate them. And then you destroy yourself. — Richard Milhous Nixon (1969–1974)

40. We are a nation that has a government—not the other way around. And that makes us special among the nations of the earth. — Ronald Wilson Reagan (1981–1989)

41. The United States is the best and fairest and most decent nation on the face of the earth. — George Herbert Walker Bush (1989–1993)

42. There is nothing wrong in America that can’t be fixed with what is right in America. — William Jefferson Clinton (1993–2001)