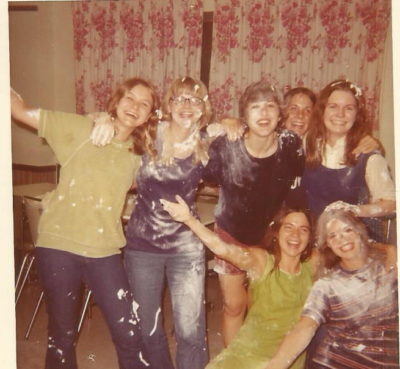 College friends shaving-cream-bombed by the men’s dorm.  We knew what “it” was, and we knew we had it.

Mamacita says:  I wonder sometimes if one of the reasons some people age horribly and die, is because they have stopped hanging out with friends.

Of course, if they are REALLY old, they may have stopped hanging out with friends because there’s not that much to do in the cemetery.

But for people (naming no names) who are perhaps just beginning to be on the old side, whose friends are still (mostly) alive, it’s just as much fun to hang out with friends as it was years ago, when we all skipped last hour Chemistry to pile into someone’s blue Corvair and head out to the State Park to meet guys.

When we meet now, and yes, Virginia, we still meet once in a while, though not nearly often enough, the only thing that’s really changed, besides our faces, hair, bodies, and big purses, is the fact that we no longer have little children at home. Some of us have GRANDCHILDREN. Not me, though.

Ahem. Are my children reading this journal?

But the giggles, the nonsense, the silliness, the goofiness, the sheer love and devotion, are all still there in full force; possibly in fuller force than when we were younger.

Maybe because, THEN, we knew what we had but didn’t fully understand that it could vanish in the wink of an eye. We were young, we were attractive, we knew it. And it would last forever. How could it not? And NOW, we know what we had and we know what we still have and we understand completely that yes, it could very well vanish in the wink of an eye, and that yes, some of it already has. We have mirrors. And even though we no longer have some of ‘it,’ we also know that, whatever ‘it’ was, we still have SOME of ‘it.’ And we aren’t afraid to use it, either.

Those of you with small children: be sure you make time for your friends. “Hanging out” isn’t just for teenagers. You need it more than they do. Hire one of them, and go meet your friends for a few hours. Keep doing it until you are dead.

Your older children and possibly a husband who won’t be requiring any sex for a while, might make a comment about how “hanging out” means something entirely different on an older woman with, um, body image deficiency. Remind them all that they know where the food is kept, and that the sofa sleeps one person very comfortably indeed. And then leave.

Get out there and use ‘it.’

Readers may interpret “it” as they please. All answers are probably correct.