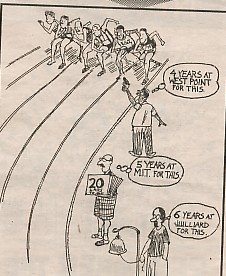 Poop. It’s all about poop.

I was forced to do stuff like this for over twenty years and I hated every second of it.

Do you hear me? Every. second. of. it.  I know that there are kazillions of teachers who live for vicarious participation in athletics, but I was not one of those.  They made me do it anyway.

I wasn’t asked to help out. I was ordered to be there. I had no choice.

Nobody told me how these little games were played. Nobody told me where to stand, or what to write down, or who’s on first. I only knew about “I don’t know.” And I wasn’t sure where third base was.

Something I do know is that a lot of teachers quit the profession because of this kind of thing.

Funny, isn’t it, that we were all required to ‘do our part’ in areas such as this, but if a teacher asked for some help at a concert or play or dance, that teacher got a lot of blank stares and no office backup whatsoever. Sometimes, people laughed.

During those last few years at the public school, teachers were no longer required to do all the athletic gruntwork; what a reeee-leeef.

I will admit that I was forced to run the clock at a basketball game only once. I was so terrible at it, after fifteen minutes NOBODY knew what the score was. We narrowly avoided a riot, in fact.

It would have helped if I’d known the rules, and what all those strange noises and gestures meant. I mean, what did they expect? I avoided gymnasiums like the plague, normally. I don’t even like the way they smell.

So yeah, I messed that game up, royally.  But I didn’t know the rules.  I didn’t know how to do it.  They made me do it anyway.  Oh, I know I’m probably the only person in the world who didn’t know how these things were done, but I knew how to do a lot of other things; why couldn’t they let me do those and let sportsy people work scoreboards and measure jumps and stuff?

On the bright side – it was shiny bright, as far as I was concerned – they never made me work a basketball scoreboard again.  What a break for me.  I suspect it was a break for everybody concerned.

If I’d only known that was how to get out of it, I wouldn’t have tried so hard at all the other sports things they forced me to help out at, because I did try.  I tried really hard.  I just wasn’t interested.  I resented being required to do these things.

I didn’t go to university for a million years just to stand outside in the cold and sell M&M’s, or to measure how far a kid jumped in sand that had been pooped in by every cat in the county.

Let their parents do that. They’re the ones who cared about it, anyway. I didn’t. Let them yell at each other, instead of me.  I had terrible earaches and colds from standing out there trying to do something I was not prepared to do.  I was sunburned and blistered.  And they still made me do it, even after I begged to be let off because I did not know how to do these things.  I am not knowledgeable about sportsing.

All of my heart and soul and attention and life was directed at those same kids; it was just aimed elsewhere.

But you know, I wouldn’t have minded as much if the joy had been equitable. As in, “You help me with this concert, and I’ll help you with your little outdoor game.”

Since it wasn’t set up that way, I agree with the cats: poop on it all.