Mamacita says: Holidays should be about love, not resentment.  Holidays should be about charity, the original, true meaning of charity, which is that same love.  Love – charity – should not be limited by yours or anyone else’s belief system.  Love is love.  Put limitations on it and it’s no longer pure, and if it’s not pure, it’s not love. All seasons are about love, and no season of love is ever over.  Whether or not you celebrate Christmas has nothing whatsoever to do with being Santa Claus for someone. Call it whatever you wish: just call it something, and go forth and do it. Letting your soul curl up into a ball of resentment because YOUR religion, or lack of such, doesn’t “do” Christmas is a waste of time, a waste of emotion, a waste of heart, a waste of zeal, and a waste of YOU.

“Charity” doesn’t mean “giving to the poor and needy;” it means LOVE, and love covers all bases. Using a belief system to rationalize your own personal whatevers is a cop-out, plain and simple. There are people out there who need you, and to walk on by because they said or did something that “offended” you is . . . okay, I’ll say it: it’s evil. Selfish and evil.

What do we live for, if it is not to make life less difficult for each other? — George Eliot

The three stages of man:

1. He believes in Santa Claus

2. He doesn’t believe in Santa Claus 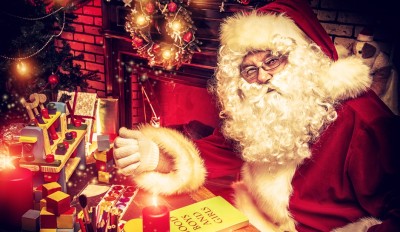 That struck me as being funny, and true. And also, even, a little bit sad, and I’m not sure why. Poignancy is always a combination of emotions, and knowing something wonderful is temporary makes us sad, even while we revel in it.

I am Santa Claus. And I do NOT want to ever let the people I love down, at Christmas or any other time. But I also realize that the people we love most have the most potential for hurting. And for being hurt. Any people who are emotionally involved have tremendous power over each other. I hope we all try to use that power only for good.

You know, like Superman. Superman used his powers for good. Unless he was under the influence of kryptonite, in which case he became a flying armageddon. I’ve met many human kryptonite chunks, working tirelessly to promote only their own beliefs and working just as tirelessly to tear down everybody else’s. They work so hard at destroying that they’ve no time left for building up.

Let us never allow the influence of ‘something else’ to turn us into anything other than good.

No belief system in the universe is a reason NOT to be Santa for someone.

And if you are a person who does not believe in this mysterious spirit of generosity we call Santa Claus, then, um, uh, hmmm. . . . . okay, I’ll say it. You are stupid. Grow up and become Santa Claus. Somewhere out there is a child who desperately needs your powers. It might be your own child, or it might be a stranger’s. What difference does it make what child it is? Get out there and make someone happy. Or, at least, happier. Make a difference. Ho ho ho.  You don’t have to call it Santa Claus.  You don’t have to call it Christmas.  Call it what you want.  Just do it.  Be it.

I’ll go even farther: If you are the kind of person who gets all huffy and offended and indignant because someone dared to wish you well in a language not suited to your personal belief system, shame on you. You’re angry because someone DARED wish you well? How dare YOU!!!!! How dare you throw someone’s sincere good wishes back into his/her face!!!!!

Now, get out there and make someone happy. If you have no children, go borrow some.

Life is so fleeting; why waste any of it in offended huffiness? We should all be trying our best to add to life, not suck the wonder out of it. 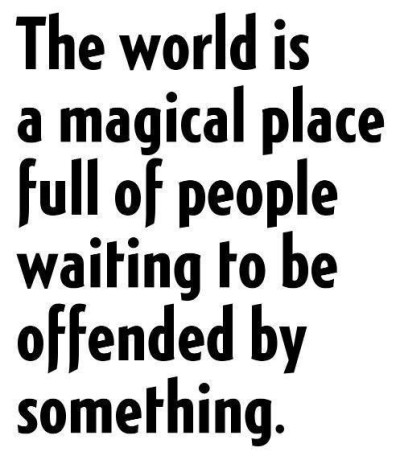 Don’t waste your life being offended.

Oh, and fair warning: if you don’t like the tone of this post, suck it up. The holiday season isn’t over yet, and easily offended people are one of my favorite targets.

They’re the whiny kid on the playground who is good for a show every time he/she doesn’t get his/her own way.

Is that you? I hope not. Such reactions are ugly in a child, but even uglier in an adult. But if it is, I’ll say it again: shame on you.

Santa is a symbol, a representation of a person who lives to help others. He’s a role model for us all.