Mamacita says:  It’s that time again; the morel mushrooms are back.  That’s right; the snow is finally gone and the semester is almost over and the MOREL MUSHROOMS ARE BACK.

Did I mention that the morel mushrooms are back?

It’s that time again.  The morel mushrooms are here. 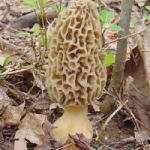 THIS is a morel mushroom. Accept no substitutes.

My kids still speak wistfully of the day they visited their step-great-grandmother Margaret Stobie Crowder (she whom John Dillinger once tried to carjack. . . .) and she shared with them her unbelievable and, naturally, SECRET, morel mushroom patch.

Remember now, Hoosiers do not share this kind of secret with ANYBODY. People who will show a stranger their genital surgery scars will not share a morel mushroom location with their own mothers. Margaret took the kids across her fields and invited them to help themselves to the mushrooms. They were everywhere. It was like a planted crop. You couldn’t take a step without stepping on morel mushrooms. They were all afraid to move, because around these parts, folks, you just don’t STEP on morel mushrooms if you can help it at all. They’re too valuable!!

How valuable are they? Well, if you can bear to part with yours, you can easily sell them for fifty bucks a pound. But it’s rare to find anyone who would part with them.

We once went to dinner at a friend’s home, and when we got there, she was preparing morel mushrooms as a last-minute addition to the meal. It seems that the night before, her husband had gone to their secret mushroom patch and had dumped two huge buckets of morels into their kitchen sink. All the guests were flabbergasted; usually, people don’t share their found mushrooms with others, either. To this day, none of us can remember what the main dish was at that meal. All anybody can remember is the mushrooms.

Except for me. Naturally, except for me. I am a freak, for I do not care all that much for morel mushrooms. I enjoy preparing them, but as for eating them. . . . well, let’s just say that everybody wants to sit by me, because I don’t eat mine and am happy to share.

And speaking of preparing them. . . . don’t let anybody tell you to use crushed saltines!!!

The proper Hoosier method is to let the mushrooms soak in salt water overnight*, and the next day, to mix together a little flour and a little cornmeal and a dash of salt, coat each mushroom, and fry in butter for just a few minutes. Remember to turn them.  Don’t let the butter burn.  Don’t overcook.  A few minutes is all they need. 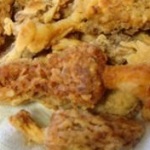 Let them cool just enough to tolerate, and turn your crowd loose on them. There will never be enough.

Back in the middle school, my students used to bring breadsacks full of morel mushrooms and sell them to the teachers for twenty dollars apiece. The teachers got morel mushrooms for bargain rates, and the students got cash. It worked out pretty well for both parties concerned. I never bought any from a student; it wasn’t that I didn’t trust them, it was just that, well, I’d seen these same kids try to tell the difference between a noun and a verb all year, and pick wrong every time. There was something about believing that they could tell the difference between a mushroom and a toadstool and pick correctly every time, that just didn’t hit me quite right. I’m sure they knew; outdoor kids know these things. It was just a feeling I had.

This practice would probably be frowned upon today.  It’s too much like a drug deal, except that morel mushrooms were more valuable.

As for the finding of them, I am probably the only Hoosier in the history of the state who not only doesn’t like to eat morel mushrooms, but also can’t find them even if they’re right there by the toe of my shoe. I can’t SEE them. I also tend to step on them, which makes me the kid who is picked last for anybody’s mushroom team. Usually, I just stay home and get ready to cook them when they’re brought home, whether I end up with a bowlful or a handful.

But if you live around these parts, around this time of year, around now, anywhere you might go, you won’t be able to escape the morel mushroom stories. In southern Indiana, we’d rather hear about the morel that got away, than about your boring old six-feet-long fish that got away.

And since I don’t care for them myself, that would be the “Queen’s We” that I’m using here.

I love to say that. It sounds so borderline.

P.S.  Morel mushrooms are not the same thing as the big round white puffball mushrooms that grow in formations we here call “fairy rings.”  And be careful when you cook up a puffball; there are all kinds of puffballs and they all look alike.  The ones that grow in fairy rings are usually safe, though.  Usually.  Always check before you bite. 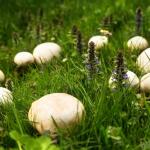 This is a fairy ring. Go ahead and eat it.

In fact, when it comes to mushrooms, if you don’t know exactly what you’re doing, it’s safer not to do it.  Let someone else bring mushrooms to you.  Some of them are deadlier than cobras.

And some are the tastiest thing you’ll ever encounter in your life.

P.S.  Always leave one puffball in the fairy ring and let it dry.  When it’s completely dry, kick it and let the spores fly.  That’s how you get the fairy ring to come back the next year.  Require your children to take turns being the kicker.  Keep track.  This is an honor.