Mamacita says:  Guess what; not every student is ‘more alert’ in the mornings; our older students are wired for the night. Believe it or not, many students are nearly comatose early in the morning and their brains spring into action later in the day. This is not always a result of staying up late playing video games, etc. Some people really are just wired for night. I’ve often wondered how different standardized test scores would be, if our students were allowed to take them at night instead of so early in the morning. Dawn. You know, when a lot of old people administrators are awake – is not beloved by everybody. 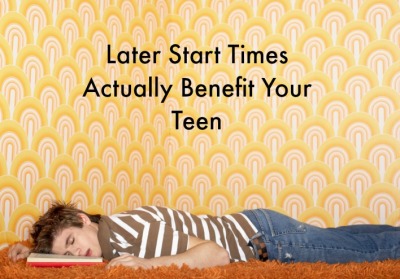 I’ve read in several places that while younger children are still usually early risers, the average high school student would greatly benefit from school that ran from noon till six.

Sadly, such scheduling would not be possible for a variety of reasons, most of them stupid, such as some elderly principal saying “We’ve never done anything like that before.” Or some old coach saying, “When would we practice?” Like I care about that. (You can play games in the morning. From 7:30 till noon. You know, when you’re more alert.) 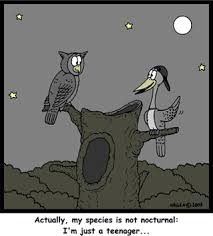 It’s because of the bus schedules. They are carved in stone.

I am not putting down bus drivers in any way. Many of them are working two jobs, and can only drive a bus during certain hours of the day. I am, however, totally putting down the mentality that can’t seem to separate convenience of scheduling from welfare of student population. Hire more drivers. Split up the routes. We all have to make adjustments in our jobs when circumstances force us to, heaven knows I did. When are we going to make adjustments in our school day?  For whose benefit should a secondary school day be planned?  Who is most important?  I vote for the students, but most administrations vote for the adults.

Another issue, of course, is the sad fact that many families rely on older kids to take care of the younger ones after school. Sigh. A different schedule would knock that into a cocked hat.

Employers would have to make a few changes, too. But what’s the difference, really, between a fast-food shift of 5-9 and 6:30-10? Some adult would get an extra hour and a half’s pay?

And, of course, many administrators are getting up there, age-wise. And old people keep early hours. Again, so what?

Teachers with young children? That’s a hard one, because I used to be one of those. But I adjusted for various schedules and so can anyone else. In this town, anyway, there are lots of daycare and sitters who are happy to work later in the evening. Not everyone shuts down at three!!!!!

But again. Adjustments for the sake of our kids. Why are they so hard to make?

Honestly. Sometimes I agree with Plutarch. 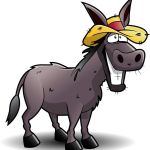 “Being about to pitch his camp in a likely place, and hearing there was no hay to be had for the cattle, ‘What a life,’ said he, ‘is ours, since we must live according to the convenience of asses!’ ”

What brought all of this up?  Every semester, my students talk about how wonderful it would have been, to go to high school and be alert. It’s not that they didn’t try to be alert. It’s just that for some people, 7:30 in the morning is NO time to be talking about algebra.

I am one of those people.

My name is Mamacita, and I am a night owl.

There are many like me, and we have no rights.

(I have a hard enough time talking about grammar at nine thirty. But my night classes? My 2:00 classes? I’m on top of those, and I even remember what we’ve done in them.)

And how about some plain common sense (or UNcommon sense, as it apparently should be called these days) when it comes to making out schedules for our older students?  A novel approach would be to take into serious consideration the biological makeup for the teen brain and body.

The preferences of adults should have nothing to do with it.  If educators really want what’s best for the students, how about we put our money where the facts are, not some elderly administrator’s personal preference.  Or a sports schedule.

Schedules can be modified.

And an extra half hour or so on the schedule of a bus driver or cook would be more than amply justified (morally and ethically, and I know neither of those words mean a whole lot to people who define education by money) by the benefits to the most important aspect of any and every school: the students themselves. 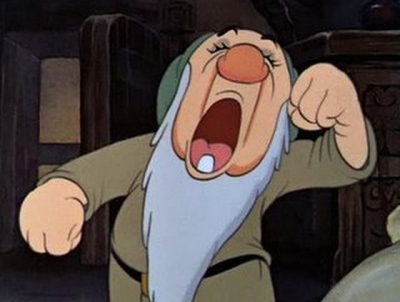