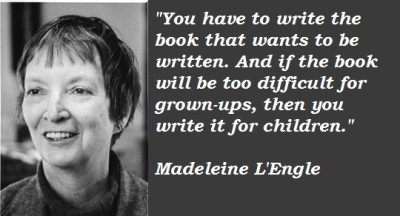 Mamacita says: How well do you know children’s and young adult literature?  Can you give me the author and title from whence the following quotations are taken?  Some of them are quite obvious if you’re any kind of reader, while others might require the assistance of an actual child or young adult. Some are fiction; some are non-fiction.  Some are quite old; some are quite recent.  Some are from novels; some are from other genres.  It’s an eclectic mix.  Google is your second resort.  Memory is your first.

1.  Enjoy is not the word I’d use. I got by.  I kept my head down and they left me alone, more or less.  I suppose that’s always been my trouble.  I’ve kept my head down when, occasionally, I should have put it up.

2  He wasn’t exaggerating; they’d been big on old-fashioned morals during World War I.

3.  Because honestly, is it trashy to want something so bad you go for it even if it might kill you?  My opinion?  It’s judging that’s trashy.

4.  To die will be an awfully big adventure.

5.  Everything’s got a moral, if only you can find it.

6.  And people laugh at me because I use big words.  But if you have big ideas you have to use big words to express them, haven’t you?

7.  Often, the less there is to justify a traditional custom, the harder it is to get rid of it.

8.  In the jungle, life and food depend on keeping your temper.

9.  No matter how dreary and gray our homes are, we people of flesh and blood would rather live there than in any other country, be it ever so beautiful.

10.  There was things which he stretched, but mainly he told the truth.

11.  There is no religion without love, and people may talk as much as they like about their religion, but if it does not teach them to be good and kind to man and beast it is all a sham. .  . .

12.  Violence does, in truth, recoil upon the violent, and the schemer falls into the pit which he digs for another.

13.  Prejudices, it is well known, are most difficult to eradicate from the heart whose soil has never been loosened or fertilised by education; they grow there, firm as weeds among stones.

14.  I never wanted to go away, and the hard part now is the leaving you all.  I’m not afraid, but it seems as if I should be homesick for you even in heaven.

15.  Instead of always harping on a man’s faults, tell him of his virtues.  Try to pull him out of his rut of bad habits.  Hold up to him his better self, his REAL self that can dare and do and win out!

16.  It was a woman, red and white, hating and loving, that called him with the voice of his hopes.

17.  One of the things people began to find out in the last century was that thoughts – just mere thoughts – are as powerful as electric batteries – as good for one as sunlight is, or as bad for one as poison.

18.  If you want to know what a man’s like, take a good look at how he treats his inferiors, not his equals.

19.  If enough people think of a thing and work hard enough at it, I guess it’s pretty nearly bound to happen, wind and weather permitting.

20.  He needed to save his energy for the people who counted.

21.  Laugh and fear not, creatures.  Now that you are no longer dumb and witless, you need not always be grave.   For jokes as well as justice come in with speech.

22.  Don’t you know what breakfast cereal is made of?  It’s made of all those little curly wooden shavings you find in pencil sharpeners!

23.  She was a girl who could not wait.  Life was so interesting she had to find out what happened next.

24.  People can tell you to keep your mouth shut, but that doesn’t stop you from having your own opinion.

25.  Until I feared I would lose it, I never loved to read.  One does not love breathing.

26.  Well, he certainly is very agreeable, and I give you leave to like him.  You have liked many a stupider person.

27.  Once you begin being naughty, it is easier to go on and on, and sooner or later something dreadful happens.

28.  We’re all human, aren’t we?  Every human life is worth the same, and worth saving.

29.  It’s a good thing most people bleed on the inside or this would be a gory, blood-smeared earth.

30.  Memory is the happiness of being alone.

Answer in the comments, please.