Mamacita says:  This is my dad, back when he was healthy and strong. Actually, it’s just a few years before the diabetes became stronger than he was. It didn’t take long. . . .

I’ve posted several times about my dying father, blind, minus both legs, on kidney dialysis, stomach tube attached to a drip, etc. That was an accurate picture, but it wasn’t the only picture. It is also not the picture I have in my mind’s eye when I think of my father.  At least, I try not to think of that phase of his life. 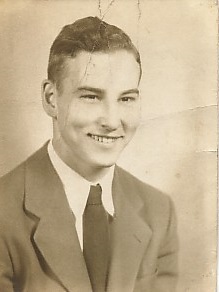 Before the disease began to affect his body and mind in ways we’ll never really know or understand, Dad was awesome.  He was a really good father to my sister Teresa and me – so funny, and so talented, and so ready with the singing and poetry and nonsense.  To our two younger siblings, Dad wasn’t like that.  We all knew he was getting really crabby and selfish and sometimes actually mean, but we didn’t know why.  I think we all assumed it was our fault, somehow, that Dad yelled because we messed up.  We just never knew what we’d done wrong, which was scary because it meant we’d probably do it again, all unawares, and get yelled at again.  Having a voice raised against me works like a whiplash.  I know some people yell all the time and it means nothing bad, but to me, yelling means badness.  The yeller is bad, and the yelled at is bad.  Dad turned into a yeller, and it affected me worse than bullets.

But before the diabetes took away my real Dad and substituted the yelling cranky Dad, Dad 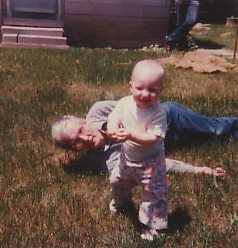 was the best.  I adored him, when he was himself.  His real self.  He could still see and walk when Sara was little, and loved to play and take her places.

I loved that Dad so much.

Today, on Memorial Day, I wanted you all to see my father before he was struck down. My REAL father. He was tall, and he was strong, and he was hilarious, and he was handsome, and he liked new experiences. He sang beautifully. He cracked terrible jokes. He was smart. He tried hard, and he did the best he could with what he had. I loved this Dad fiercely.

That was my brother’s motorcycle, but Dad liked to take it around town of a late afternoon..

So did I, in fact. Please don’t tell Mom.