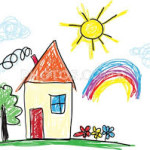 Mamacita says:  I am starting to look at my house with holiday eyes, and it has made me pensive. I used to look at my young students every day, every year, and wonder what they went home to every night. Sometimes, I knew, and my heart broke for them daily. With others, I had no idea. When a child comes to school in rags, shoes held together with tape and rubber bands, hair all shaggy, and skin obviously not quite clean, it’s pretty much a done deal that there’s trouble at home. Usually, these children were ravenous because the only ‘decent’ meal they ever got was at school, so Monday mornings, so they RAN from the bus to the cafeteria for that free breakfast that was sometimes the first food they’d had since Friday lunch.

Most of the time, THOSE parents never darkened the door of the school for any reason. Occasionally, one of them would actually show up for a conference, and I would sit there on the other side of the table gritting my teeth and gripping a pencil so tightly that sometimes it broke, because nine times out of ten, the parent of my raggedy little starveling was dressed pretty darn well, and it was rare that he/she didn’t reek of cigarette smoke. In other words, money WAS being spent, but not on the child.

Cigarettes in the purse, no socks on the child. Beer in the refrigerator, no decent shoes for the child. Nice clothes on the adult, rags on the child.  And where was the warm coat we gave the child only a few days ago?

I can feel my blood pressure rising as I remember it.

Why, why, WHY, when these poor kids are constantly removed from these ‘homes,’ are they just as constantly put right back in to be mistreated just like before? Sometimes, in fact most times, ‘keeping the family together’ is NOT important. Sometimes, splitting a family apart is the best thing that could ever happen to it. When parents do not behave like adults, they have no business inflicting it on innocent children. Get the kids out of that house, and put them where they’ll be fed and clothed and loved. Any adult who would buy cigarettes when his/her child has no socks, is a monster, not fit to raise a child. Addictions? Cry me a river. The needs of children always come before any needs of an adult. And especially before an adult’s hobby, toy, or habit.  Oh, and does anyone really think these children will ever again “tell” what’s going on at “home?”

I like to think that most days I am reflective and wise, but sometimes it really gets to me and I am just angry and far from wise.  Oh, so very, very far.

This one time in band camp in one of my college classes, we were discussing “It’s A Wonderful Life,” in relation to our own lives. I asked my students to think about how life might have been for their loved ones had they never been born.

That was when we all learned that one of my lovely students, who was only nineteen, has been the ‘mother’ of her seven siblings for eight years, ever since her mother sensed a better deal down the road and ‘left.’ If she had never been born, those siblings would probably have been sectioned out to foster homes. Her brothers might have gotten in trouble with the law, with nobody at home to supervise them. Her sisters might have sought ‘relationships’ in an attempt to get affection. Her father might have succumbed to his depression if he had to work four jobs knowing nobody was watching over his children. She told us that her youngest sibling was only two when their mother ‘left,’ and that he started calling her ‘mom’ within a few days of her leaving. She talked about cooking, buying clothing, budgeting, potty-training. . . . when all the other girls her age were playing with their dolls, skating, watching Sponge Bob, and later dating, hanging out, and staying after school for ball games and club meetings. Was she sorry? No, she would not have done it any other way, but it would have been nice to have been a child when she was a child, and a teenager during her teens, instead of having to be an adult because an actual adult wasn’t done acting like a teen.

My students tell me these stories all the time.

I think one (of many millions) reason so many kids loved Harry Potter was that he, too, lived a life of horror with abusive,, neglectful, unloving people, and was RESCUED!  Rescued, and removed, and sent to live with nice people who loved him.  Even the yearly returning to the Dursleys was endurable once he knew he would not have to live there forever. How many of our children stay sane mainly because of the hope of rescue?

So they’re rescued.  And then they’re sent right back because some adult says he/she’s sorry.

Abusive adults aren’t sorry for how they treated a child.  They’re only sorry because while the child wasn’t living with them, they didn’t have welfare money for cigarettes, booze, meth, and cable. 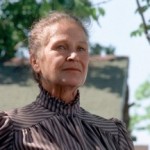 Look around. Every person has a story to tell. Sometimes you can tell by their outsides, and sometimes you can’t. Usually, we can’t.  Marilla Cuthbert told Anne Shirley this, and it is true.

I would bet money, though, if I had any money, that an adult who would put his/her own selfish wants and addictions over and above the needs of a little child, is not even going to be in the running. Shame on them. Shame, and more shame.  Hell is too good for an adult who puts his/her own wants and even needs above the needs of a child.  If you have gloves and your child has no socks, you’re a beast.

I do not understand many things in this world, and one of them is this: when “everybody” knows a home is not a fit place for a child, why does “everybody” talk about that fact, yet allow the child to remain in the home?

“What a shame, those poor kids, alcohol, drugs, prostitution, gambling, live-in lovers, possible molestation. . . . .” and then we watch them get on the bus, knowing they’re going “home” to hell house.

I am so down tonight. I wish I could gather up all these kids and wash them, and feed them, and put clean socks on their feet, and intact shoes, and pretty clothes. I wish I could fill Christmas stockings for them, and hug them, and give each one a doll or toy of some kind that would be their very own and nobody else’s. And if their worthless deadbeat parent tried to take it and sell it for drugs or booze or a manicure or anything whatsoever, I hope a sensor in it would explode and wipe that bum off the face of the earth. Peace on earth, yes.

Read it right: “Peace on earth to men of good will.”

The other kind can bite me.