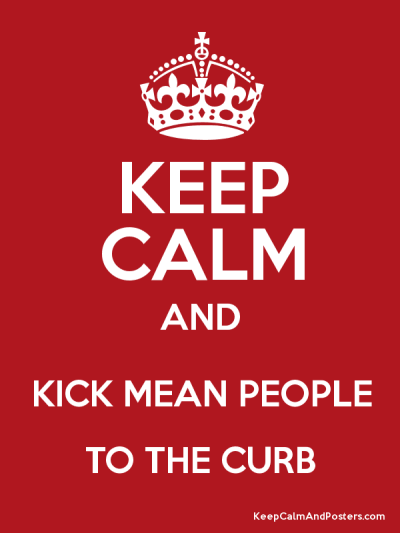 Mamacita says: And lo, there are things nice, smart, decent people just simply do not do, and here are some of them. No, this post isn’t about murder or assault, but it is about petty things that turn you from a nice person into a creep.  If you recognize yourself, change your ways lest you burn in the fiery depths of Hell, which is where people who are not nice belong anyway. Bring it on.

2. Nice people don’t get in the wrong lines. If the sign says “20 items or less,” grammatically incorrect though it may be, nice people get in the regular line if there are 21 items in their cart. If you get in the 20 items line with a mounded cartful, or even just 21 items, you are not a nice person.

3. Nice people return carts to the corral. Period. If you leave your cart in random spots in the parking lot, you are not a nice person.

4.  When nice people decide not to buy an item after all, they return said item to its proper shelf.  Nice people do not place items on the nearest, handiest shelf.  No.  Assholian people do that.  You’re the one who moved the item, so you’re the one who needs to put it back.  IN THE RIGHT PLACE.  If you put unwanted items on the nearest shelf instead of returning them to their proper place, you are not a nice person.  The store cannot sell the frozen pizza you decided you didn’t want and placed on the bread shelf.  The store cannot sell the gallon of milk you decided you didn’t want and placed in the shoe department.  You are responsible for ruining those items.  Thief.

5.  Nice people do not make noise in the movie  theater.  If you talk, let your phone ring, eat constantly and let your food make sounds, get up and down a lot, and don’t insist that your children behave in the theater, you are not a nice person.

6.  Nice people don’t eat and drink in a store.  Such people tend to leave litter and stains on merchandise.  If you can’t wait until you step out of the store to dive into your unpaid-for cheese curls and sodas, but must inhale them IMMEDIATELY as you push your cart down the aisles, you are not a nice person.  P.S.  Until you pay for it, it’s not actually yours.  Thief.

7.  Nice people don’t go through a restaurant’s drive-through line if they’ve got a special order of some kind.  For special orders, nice people park and go inside.  The drive-through is for people who are in a hurry – people who order a #5 and a #8, both with Cokes.  If you need a #9 with no ketchup or pickles and some french fries with no salt, GO INSIDE.  Nice people don’t hold up lines.

9.  Nice people don’t smoke where there are other people, and especially if there are children.  Uncle Fred, who’s smoked three packs a day for 38 years and is feeling just fine, thanks, who lights up at the family reunion right in front of all the nieces and nephews and Grandmother who’s just out of the hospital, is a jerk.  A big, fat, jerk.  Nice people don’t do that.  Nice people ask permission even to go outside and smoke at your house.  Yes, I said permission.  I don’t want my yard covered with butts.  Go home and smoke.  Stink up your own place.  Nice people who never dream of doing that.

10.  It goes without saying that nice people don’t pick their noses or fart/burp on purpose or scratch where the sun don’t shine when they’re with other people.  These things are done in private, never in public.  Chainsmoking Uncle Fred (see above) who sees nothing amiss in lighting up will probably be guilty of these offenses, too.  Uncle Fred has no class.  He’ll probably offer your toddler a sip of his beer.  Nice people do not do these things.

It’s called “manners,” friends.  People with good manners have “class.”  I realize that those who don’t understand why the above 10 things are wrong won’t understand that they have no manners or class, either, but that doesn’t mean they should have their own reality show and make money whenever some equally classless person thinks it’s cool to watch a pack of hormonal, farting, nosepicking hilljacks dressed in camouflage eat roadkill possum and dance with pigs.  Not that there’s all that much difference between the pig and the child. . . .

Now.  Let’s all get out there and do our best to act properly in public.  The universe thanks you.

Also?  I am not making fun of the above offenders.  I am reacting in horror.  There’s really nothing funny about them.