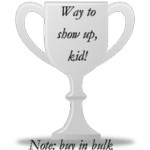 Mamacita says:  The world is so full of lovely, kind, honest people. Seriously, I agree with Anne Frank, who said, “In spite of everything, I still believe that people are really good at heart.”

How is it that in a world full of decent people, so many indecent and horrible people are able to rise to such levels of power and popularity?

Many sports enthusiasts can tell you what Lou Gehrig’s stats were on any given date, but they can’t tell you the name of the disease that killed him, and they don’t know why he considered himself “. . . the luckiest man on the face of the earth.”

Small children can sing every word to songs with lyrics that would have gotten us expelled from grade school, but they don’t know the lyrics to the National Anthem.

People of any age can tell you all about their “rights,” but many of them know (and care) NOTHING about their responsibilities.

People such as the Brangelinas make shacking up and having illegitimate babies seem not only respectable, but desirable, and our young people are falling for it.

Athletes are cool, and Nerds are just geeky, even though just a few years down the line, those athletes will probably end up working for the nerds. Or wishing they could.

Book that makes one think and question and wonder? DANGEROUS TO OUR BELIEF SYSTEM! Which means, of course, that the belief system is so shaky that a simple question from a child will topple it. Or, even worse, require someone who is entrenched and comfortable to fear that the cocoon will be opened and a ray of (shudder) unfamiliar light might shine down upon it, revealing things as they actually are.

A ship in port is safe, but that’s not what ships are made for. –Grace Murray Hopper

Administrations that consider the score on a standardized test to be the end and all of what education is, are sadly mistaken and even purposely ignorant. IGNORANT BECAUSE THEY WANT TO BE. I believe in passing tests, but it’s the knowledge base that’s important, not the ability to bubble on paper with a #2 pencil within a certain time allotment.

We’ve even got TEACHERS (They’re not educators!!!) who don’t think a knowledge of the “basics” is important.  How can anyone learn the cool stuff if they don’t have a knowledge base to make the connections with?  They can’t; that’s what.

An echo is not original. Good scores are not the intention of education. Good scores are nice, of course, but a monkey with a pencil can get a good score if it is given enough chances, simply through trial and error and the process of elimination.

Many kids today refuse to do chores or work at anything unless there is an immediate reward dangled before their dazzled eyes. “Raise your math grade a whole letter and you’ll get that Wii you’ve been wanting.” What happened to “Do your best and we’ll all be so proud of you!”

Teachers are told, with more than a hint of threat, to make sure the athletes pass so they can play in the game Friday night. Athletes are no longer representatives of a proud educational system; they are a source of revenue and often pawns in the power -play between stupid parents and equally stupid administrations. Good parents will encourage sportsmanship and good grades and excellent citizenship, and good parents understand that in a perfect world, nobody would represent the school and community on any kind of playing field without all three. It’s the bad parents who insist that their kid be a starter even though he’s failing math and English and hasn’t turned in any science homework since the first week of school. Why should he? He knows he’s going to get anything he wants anyway; Daddy and Mommy will see to it. Self esteem rules.

I will never understand why so many parents don’t see that self-esteem is something to be EARNED. It can’t be given. Any kid understands this; why can’t adults? Trophies for showing up are ridiculous. I’ve heard kids laughing in the restrooms, year after year, over the beaming adults in an audience, ecstatic because their kid got a trophy for the two points he made in that one game. A TROPHY! I am not speaking of special olympics; I’m talking about the regular stuff.

When a kid can get a limo ride and a free lunch for not hurting anybody for three days in a row, why should any kid try hard? Good kids don’t generally get ANYTHING! It seems to be the bad kids who are catered to and rewarded for bringing a pencil, or not drawing blood for a whole day. Self esteem? The self-esteem of our good kids is going down every day, because we don’t have time to give them any attention. They’re well-behaved and working, and we just don’t have time to tell them how much we appreciate them because we’re too busy breaking up yet another fight between the same kids who do this on a daily basis and can’t be kicked out for whatever reason the law or community or parents have decided to apply. And if a nice kid tries to defend himself/herself, they’re punished for it. Bah.

Schools are not set up for kids who really, really love learning. Schools are set up to cater to the lowest common denominator. Kids who love Ravel? Say what? Kids who talk in street code and don’t even know how to speak any language fluently? Oh YEAH.

Kids who love science? Sorry, that’s not being tested this year so we’re not offering it. We’ll put you in this developmental reading class so you can help the teacher tutor the freshmen who still can’t read but who have been promoted yearly anyway. Have a nice year.

Did you know that in many systems, a failing kid can sign up to take the AP test, fail it, but still get an honors diploma?  For showing up?

People who have power have changed our educational system until it’s become this way. How did we let it happen? Kind, decent, intelligent, hard-working people are the majority, and yet, they seem to have no say whatsoever in how things are being run.

No Child Left Behind? Ain’t gonna happen. And why is that? I can tell you why.

A lot of children WANT to be left behind. They don’t care, and neither do their parents. Our families failed long before our schools did.  Contrary to what many people believe, learning is NOT up to the teacher; it’s the child’s responsibility.  It’s easier with a good teacher, but it’s still up to the student to do or not do, listen or not listen, etc.  And if the best teacher in the universe is talking to a brick wall, bred by two brick walls, not much is going to happen. And guess who is blamed?

I think we should try as hard as we can to help all children, but that we should concentrate on the ones who WANT to learn. And with those children, we should give every drop of life’s blood that we have. Otherwise, the next time your kid’s history book is revised, the new edition will have a chapter about Britney and Lindsey and Paris, and their contribution to our culture. (For those few who bothered to learn how to read.)

Inventors. Doctors. Philanthropists. Missionaries. Neighbors. Parents. Mathematicians. Decent role models. Kind, generous people. Discoverers. Good teachers. Athletes who can REALLY do it. (not the ones who can’t do it without drugs, etc.) Men and women who don’t leave when a better deal comes along. People with integrity. People with a moral compass. Ministers. (Preachers gross me out) Hard workers. Authors. Poets. Scientists. Storekeepers. Masons. Construction workers. People with what it takes to keep it in (or out of) their pants.  Etc.

These used to be our children’s role models. How did we allow it all to change? Because, you know, it couldn’t have changed this completely without the complete cooperation and approval of an awful lot of people, whether they did it consciously or not.

Now, if you’ll excuse me, I think Britney is going to tell us all about how she turned her drug-battered body back into a muscle machine and decided it was fun, after all, to be a mother to her two very confused little sons. This week, anyway. Stay tuned.

I will always agree with Anne Frank, but it does get more difficult every day.