People wear poppies on Veterans’ Day.  Do you know why? 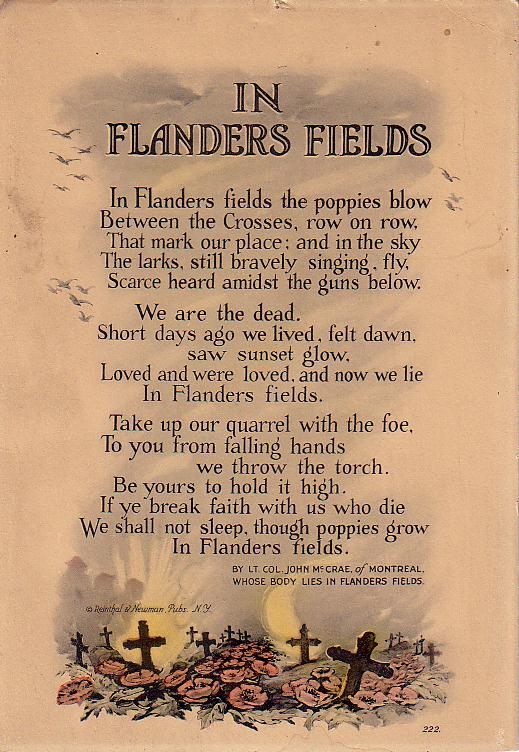 After World War II, Armistice Day was changed to Veterans’ Day.  Many people do not realize that this is an international holiday, observed by many other nations as well as by the United States.

Schools do not teach students much about World War I, and I have never really understood why.  Most social studies classes, unless it’s a specialized elective, study the Civil War (Frankly, my dear, I don’t give a damn) and then make a giant leap over everything else so they can briefly mention World War II (Hitler was bad) and then leap again and remind students that JFK was assassinated (“I am the man who accompanied Jacqueline Kennedy to Paris”) (“I am a jelly doughnut!”)  all just in time for summer vacation.  I learned most of what I know about World War I from reading L.M. Montgomery’s Rilla of Ingleside, and yes, it’s another Anne book; this one is mostly about Anne and Gilbert’s daughter Rilla. I cry every time I read it, even though I know what’s going to happen.  You’ll cry, too.  This book was written eighteen years before Anne of Ingleside, which takes place when the children are very young and was was sort of “inserted” into the list of Anne books, but that’s all right.  I would imagine, though, that at the time the books were being written and published, that might have been confusing to readers.  Anne of Ingleside has an ominous vision in it, that comes true in Rilla of Ingleside.  I have not been able to re-read Anne of Ingleside ever since I realized this.

“It’s about how we treat our veterans every single day of the year. It’s about making sure they have the care they need and the benefits that they’ve earned when they come home. It’s about serving all of you as well as you’ve served the United States of America. Freedom is never free.” – President Barack Obama

“There is nothing wrong with America that cannot be cured by what is right with America.” – former president Bill Clinton

I also like this one by Calvin Coolidge:  “The issues of the world must be met and met squarely. The forces of evil do not disdain preparation, they are always prepared and always preparing… The welfare of America, the cause of civilization will forever require the contribution, of some part of the life, of all our citizens, to the natural, the necessary, and the inevitable demand for the defense of the right and the truth.”

And I’ll end this post with this one, by FDR:  “When you see a rattlesnake poised to strike, you do not wait until he has struck before you crush him.”